As daytime segued into evening, the personality of Universal Studios Florida segued from fun and frivolity into apprehension and anxiety. I was in Orlando

to attend the 25th anniversary edition of Halloween Horror Night,

Was I absolutely crazy for putting myself through an evening of terror?

Halloween Horror Night started in 1991 with one haunted house and was called Fright Nights. The following year it was re-named to its current moniker, scaring participants for a whopping three nights. The 2015 incarnation features nine houses, five scare zones, and two show productions over 30 nights.

Was I crazy? Perhaps. But I was also ready to tackle the evening! 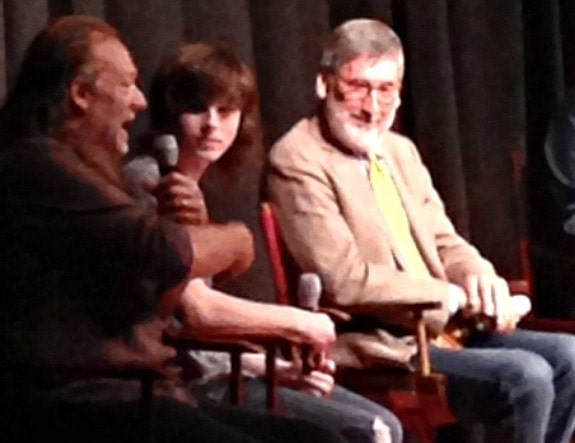 Greg Nicotero, Chandler Riggs (both of The Walking Dead) and Director John Landis

co-executive producer with an impressive resume in special effects), and actor Chandler Riggs (who plays Carl on The Walking Dead).

While I know who John Landis is, but more for Animal House

and Blues Brothers than for his horror films, the rest were unknowns to me. While I dabble in the horror film genre, I find the traditional horror elements to be compelling, this discussion was mostly about previous HHNs, slasher films, zombies, and films that I’m unfamiliar. But they sucked me into the discussion, talking about special effects and career evolutions, werewolves and zombies, and all sorts of other things that go bump in the night. I was hooked.

Was I crazy? No, I was fascinated at the horror history explained and excited about how the evening was going to unfold. I think of slasher movies as being without a plot, and this session was a big reveal on how developed the plots were in each of the house. It was time to put my mettle to the test and hit the scare zones and the nine houses. 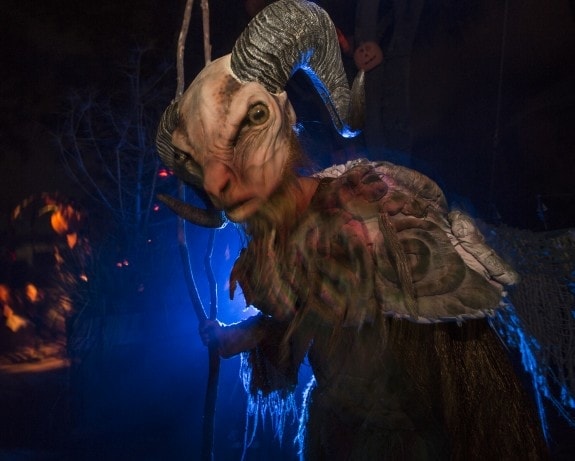 To move about HHN, you pass through Scare Zones, oudoor areas with “scaractors” (rhymes with characters) that carry out the theme of that area of the park. This creates a seamless scary experience as you’re always in the moment, never on the outside looking in. Characters will come up to you, chase you, jump out and tease you, all in the name of good scary fun.

This year’s Scare Zones are:

Was I scared? Just a little. There is a crazy level of activity going on in the Scare Zones and much of it fascinated me. I was constantly turning my head right and left, up and down, and that meant it was easy to be blind sided. It’s sensory overload with so much to see, lights flashing, music blaring, all sorts of sound effects, special effects, and it’s dark to boot. It’s easy to miss a chain saw toting zombie in that madness.

Tips for enjoying the Scare Zones:  Wear comfortable, close-toed shoes. You’re going to be doing a lot of walking so protect your feets and toes. Drink it all in, but watch where you’re walking. There is so much going on that it’s easy to get sidetracked from where you intended to go. The characters are usually willing to pose for photos, if you’re quick about it.

First stop was Bill and Ted’s

Excellent Halloween Adventure, one of the two shows offered at HHN this year. We did this as our first stop in the evenings activities. Relying on the well known Bill and Ted characters, and audience familiar plot lines, this show was a parody of movies, televisions, and pop culture. I followed most of it, but have to begrudginly admit that there were a few zingers that went right over my head. Scary factor:  zero. 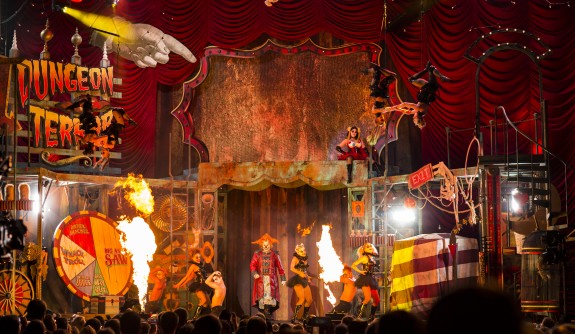 The Carnage Returns Show: Jack is Back

The other show offered is The Carnage Returns with Jack the Clown engaging in murderous mayhem. How scary can a clown be? Jack is back, and remember, he always has the last laugh. We didn’t see this show, but I’m advised that it has a bit of a scary factor.

Tip for enjoying these shows: I’d suggest using these seated events to break up the time on your feet. There are still lines for the shows, but you’re rewarded with great entertainment AND a chance to sit down and rest up. I think it would make for better pacing.

There are nine haunted houses (also called mazes) this year, set up in locations around the park in a combination of actual house structures and specially erected tents. While I did the houses in order, one through nine, there is no specific reason for doing so – pick the themes you like best, and go there first. 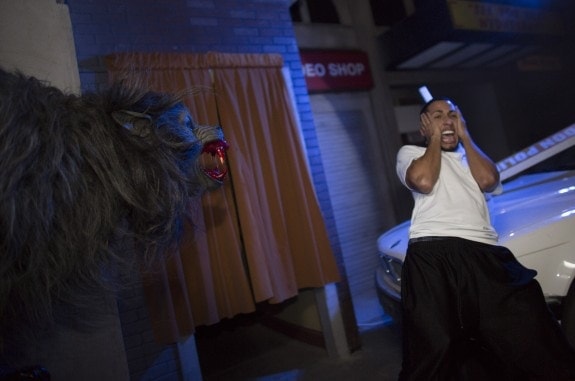 An American Werewolf in London haunted house at HHN

The nine houses are:

Tips for seeing the houses:  Lines are long, the temperature is warm (and sometimes the tempers get that way, too), so wear comfy shows (flat and closed toes) and bring water to keep hydrated. You’re going to be spending  a lot of time on your feet, so plan accordingly. The houses will put you on sensory overload, with loud noises, bright lights, strobes, strange smells, and all sorts of things that jump out at you. When you need a break between this intensity, catch one of the shows, or head to another area of the park (more on that below).

Scary factor? It varies. I think that I over-prepared for an intense experience and as a result, I didn’t find it terribly scary. In fact, I spent a lot of time smiling and laughing in awe and amazement. The effects were amazing, and I appreciated the creativity that went into it, even if I wasn’t scared witless.

To be fair, however, I was an anomaly about the scare factor. I was surrounded by scared and screaming people. Smiles or screams – your mileage may vary.

If you are exhausted, over stimulated, or just need a break from the intensity of HHN, you can find some safe zones in the rest of the park. A number of traditional rides and attractions were open, including The Simpsons Ride, Transformers, Revenge of the Mummy (one of my favorites), Men in Black Alien Attck (another favorite, can see myself riding it over and over), Rip Ride Rockit (a crazy roller coaster that I have no need to do again), and Escape from Gringotts. Many of the facilities and shops in Diagon Alley were open, making it a popular spot to rest up and grab a butter beer.

Tips for having the best HHN experience:

Tickets:  A variety of individual ticket options are available if you’re not opting for a resort package.

Disclosure:  My trip to Orlando, along with the time spent at Universal Orlando and HHN25 was sponsored by theme park. The sights and frights were all my own.

Photo credits:  In keeping with the requested policy, I didn’t take pictures inside the houses. With the exception of the press conference (which I took with my phone), the remaining photos are used with permission of Universal.