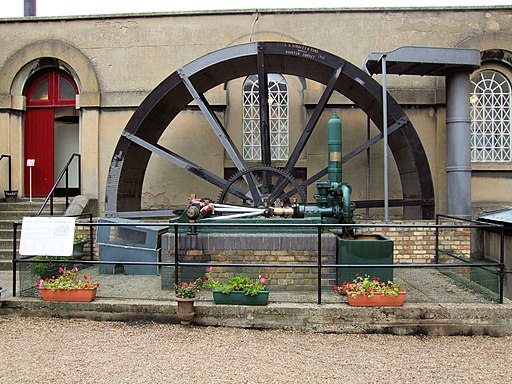 Fans of the offbeat, quirky museums and industrial history may enjoy London’s Kew Bridge Steam Museum, home to a collection of water pumping steam engines.  While it may sound a bit dull at first thought, Victorian-era London produced some of the finest waterworks around, and it’s on display here.  Located on the River Thames in west London, this quirky steam museum is easily accessible from most hotels and apartments in London.

The steam museum is on the site of the original Kew Bridge Pumping Station which originally opened in 1838.  Although the pump station expanded over the following few years, eventually the steam engines were retired from service.  The final use of steam engines at the site was in 1958 – it was a demonstration only.  The pumps weren’t eliminated completely, however, they were merely stored in the hopes that they could be displayed to the public at some later time.

Fast forward to today, and the former pumping station has become an internationally recognized museum of steam pumping engines.  With a Victorian-style setting, it’s a wonderful blend of elegant and practical, and the Italian Renaissance-style standpipe tower is a recognizable local landmark.

The Kew Bridge Steam Museum is home to the world’s largest collection of Cornish Beam engines, including the largest one – which was used to pump water in London for nearly a hundred years – which stands 40 feet high and weigh around 250 tons.  It’s one monster of a pump and is fired up once a month for specially scheduled public viewing. Also on display:  a Bull Engine dating back to the mid-1800s, an Allan Diesel engine, and plenty more.

The steam museum is also a celebration of London’s industrial history, with an excellent display of huge sewers, pumping stations, public fountains, and an operating steam railway.  The railway operates on a short track that runs around the Kew Bridge site, and while at one time it might have transported coal to feed the engines, today it offers passenger rides (during the summer).  There are a number of special events that are regularly scheduled, including the Giants of Steam weekend when they fire up the big engines, so check the official website to see if there’s something going on when you plan to visit.

Location:  Green Dragon Lane, Brentford (on the north side of the Kew Bridge).  Take the Kew Gardens Tube, the Kew Bridge rail, or any number of buses that stop at Kew Bridge.  If you stay at one of the Citybase Apartments, you’ll find the convenience of public transportation near your front door.