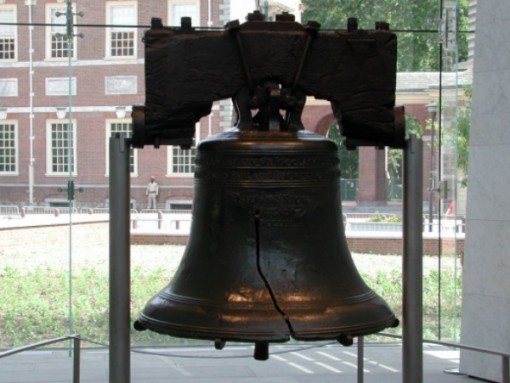 With its historical significance and message of freedom, a visit to see the Liberty Bell in Philadelphia will be on most history buffs travel list.  The Liberty Bell is one of the iconic symbols of the American Revolutions, and since then has served as a symbol of independence, freedom, and liberty.

The bell was originally cast in London and designed to be used at the Pennsylvania State House.  It cracked soon after its arrival in Philadelphia.  Local craftsmen cast a new one and it was installed in the State House in 1753.  Weighing a little over a ton, the bell rang many times as the official bell of the Pennsylvania State House.  It tolled many public announcements, including the opening of the 1774 First Continental Congress and after the 1775 Battle of Lexington and Concord.  But perhaps the Liberty Bell’s most famous ringing was on July 8th, 1776, when it called the citizens together for the reading of the Declaration of Independence.

As a result of all the ringing, a thin cracked developed in the Liberty Bell.  It was able to be repaired, but when it rang for a George Washington birthday celebration on February 22, 1846, it cracked again.  This time, the previous crack was stressed again and it expanded to the crown of the bell.  After this crack the Liberty Bell was unusable as a ringing bell, and it has not been rung since.

Although it was unusable, the Liberty Bell traveled around the country, making appearances at fairs, expositions, and local events.  The country had been torn apart during the Civil War, and the traveling exhibit was designed as part of the efforts to heal and unite the country.  Unfortunately, all that travel caused the bell to crack even further.  Finally, in 1915 the Liberty Bell returned to its home in Philadelphia, where it now rests silently, reminding us of the power and importance of our freedoms and of the often intangible concept of liberty.

Once back in Philadelphia, the bell was housed in the bell tower at Independence Hall.  When preparations got underway for the American Bicentennial celebration, a small glass pavilion was built to showcase the bell.  Queen Elizabeth attended the ceremonies, presents a full-size replicate of the Liberty Bell that had been cast at the same British foundry as the original one.  That replica bell hangs in the tower at Independence Hall where the original was intended to be housed.  The Bicentennial pavilion proved too small to accommodate the millions of visitors who came to view the Liberty Bell, and eventually a larger pavilion was created and named the Liberty Bell Center.

Visiting the Liberty Bell Center is a lesson in patience.  The line is usually long, often full of students on a group trip.  Once you get to the entrance you’ll need to pass through a security screen and things get backed up once again.  You’ll need to remove all your coats, jackets, sweaters, etc., and remove EVERYTHING from your pockets, before passing through a metal detector.  If you can manage to do this at the airport, you’ll be fine, but there are always a few people who find this difficult and slow up the process.  Make sure you’re all ready to go when you get to the front of the line and try to be patient with those having difficulty.

After you finally get through security, you’ll enter a lobby where you’ll see a short video presentation, exhibits about the creation and history of the bell, and some displays of bell artifacts.  History buffs seem to spend a bit of time in this area, appreciating what’s happened to get us to this point.  Once through these exhibits you’ll enter the glass chamber that houses the Liberty Bell.  The bell is displayed at ground level and through the windows in the background you can see Independence Hall.

It’s a simple bell.  With a crack.  On the floor of a room made of glass.  And what it represents took my breath away.