Ringing in the New Year in New York City is a bucket list item for many people. The annual ball drop in Times Square, as well as other celebrations throughout Manhattan, plus events in the Bronx, Brooklyn, Queens and Staten Island, makes New York City an ideal spot to ring in 2015. For a visitor, however, the thought of researching and putting together all the details of a New Year’s getaway may be overwhelming.

NYC & Company, the official marketing and tourism organization for the City of New York, has put together some tips and ideas to make New Year’s Eve planning just a little bit easier. (If it’s too late to make your plans for this year, start making your plans today for next year.) 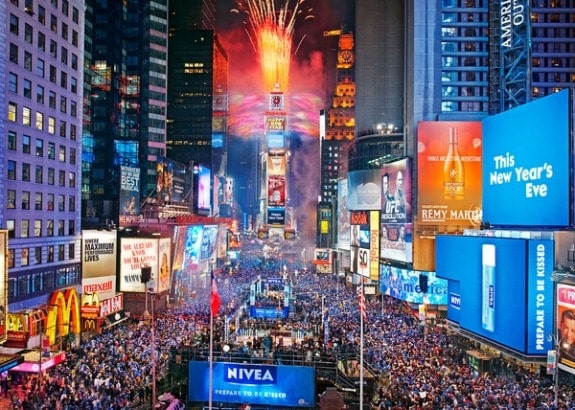 The Ball Drop:  The iconic ball drop (and yes, in this case, iconic is used appropriately) is one of the most celebrated New Year’s Eve experiences. More than 100 million television viewers in the United States, and more than 1 billion people worldwide, are expected to join the estimated 1 million revelers in New York City to watch a 108-year-old tradition: the Times Square New Year’s Eve Ball Drop.

A 12-foot geodesic sphere covered in 2,688 Waterford crystals, the ball weighs 11,875 pounds and is powered by 32,256 Philips Luxeon Rebel LED lights, capable of creating a palette of more than 16 million vibrant colors. At 11:59pm, the ball begins its descent atop One Times Square as millions of people count down the final seconds of the year and celebrate the beginning of a new year full of hopes, challenges, changes and dreams.

New Year’s Eve Wishing Wall:  Every New Year’s Eve at the stroke of midnight, Times Square is covered with confetti inscribed with thousands of wishes from people from around the world. Individuals may submit a wish in person at the mobile wishing wall or online (page available in English, Spanish and French). All wishes will be collected and added to the confetti that will flutter down onto the streets as 2015 begins. The Mobile Wishing Wall will be available during the month of December.

Good Riddance Day:  The Good Riddance Day celebration is a chance to say farewell to the worst memories of 2014. Whether you want to scrap an old love letter, a parking ticket, or a pile of medical bills, bad memories can be shredded and destroyed by a mobile shredding truck that will be present in Times Square on Sunday, December 28. Bad memories can also be tweeted @TimesSquareNYC and can be entered in a contest to win a trip to Times Square for New Year’s Eve.

At The View Restaurant and Lounge guests can partake in a New Year’s Eve gala with dinner and dancing, 48 stories above Times Square. The night consists of a five-course meal, passed hors d’oeuvres and late night bites in the lounge. Entertainment for the evening will include a DJ, dancing, live streaming of the Times Square ball drop, and breathtaking panoramic views of New York City.

Those looking to stay at the hotel can celebrate with an Ultimate Luxury New Year’s Eve package, complete with limousine transportation and accommodations in the sumptuous two-bedroom presidential suite. Additional treats include champagne, hors d’oeuvres, a personal stylist and a celebration at the Broadway Lounge.

New York Botanical Garden:  As a part of the annual Holiday Train Show, Thomas the Tank Engine & Friends will be taking children and their families on a memorable sing-along adventure as they decorate the station. Parents can bring along cameras for photo opportunities with Thomas. This special event runs from January 3 to 25, with various showtimes each day. Ticketes and full performance schedule here.

Coney Island Polar Bear Club Annual New Year’s Day Swim:  On January 1, the Coney Island Polar Bear Club will host their annual New Year’s Day plunge into the Atlantic Ocean. The swim is open to the public and starts at 1 pm on the boardwalk at Stillwell Avenue. Donations to Camp Sunshine, a charity for children with life-threatening illnesses, are welcome. Event information, pledging and registration details can be found here.

Barclays Center:  For his first-ever New Year’s Eve Concert in New York City, Elton John will be performing his classic hits at Barclays Center. Beginning at 9 pm, the show will feature music from his entire career, including his mostly recently re-released 40th anniversary CD. For more information and to purchase tickets go here.

Brooklyn Bowl New Year’s Eve:  Deer Tick 10 will have a six-night residency at Brooklyn Bowl including a New Year’s Eve performance. Doors open at 6 pm, the show begins at 9 pm. The show will feature original music by the band as well as covers of other distinguished artists. Tickets are $40. More information and tickets here.

Circle Line Sightseeing Cruises:  Spend New Year’s on a party cruise that takes visitors right out to the Statue of Liberty  to watch the City’s annual fireworks display. The cruise includes hors d’oeuvres, a full open bar, party favors, DJ, and a champagne toast at midnight. The cruise boards at 9 pm and sails from 10 pm to 1 am. Tickets can be purchased at an all-inclusive early-bird price of $149. Must be 18 years old to board and 21 years old to drink alcohol.

New York Philharmonic:  The New York Philharmonic will feature a Gershwin Celebration on New Year’s Eve, conducted by Bramwell Tovey. The program begins at 7:30 pm and features Dianne Ree ves and Norm Lewis as the vocalists for the evening. The program will include Gershwin’s Cuban Overture,Catfish Row, Porgy and Bess and jazz-inspired selections from the Gershwin songbook.

Ripley’s Believe It or Not! Times Square:  With over 500 artifacts and 20 galleries, Ripley’s Believe It or Not! Times Square will be holding a New Year’s Eve celebration to ring in 2015. This year’s event includes an open bar, nonstop cocktail-style delicacies and a night full of exciting entertainment. There will be music, dancing and games, and Mad Science will be performing science experiments. The celebration begins on Wednesday, December 31, with doors open at 7 pm and the party from 8 pm to 1 am. Tickets start at $295. This is a family friendly event and is open to guests of all ages.

Emerald Nuts Midnight Run:  On New Year’s Eve, the Emerald Nuts Midnight 4-Mile Run takes off in Central Park.  The night kicks off with dancing and music at 10 pm, followed by a costume contest at 11 pm at the Central Park Bandshell. The 4-mile race around the park will begin at 11:59 pm, and runners will be racing under the fireworks as the new year begins. There will be several prizes throughout the night, including cash prizes for the top three runners to finish for both men and women.

World Yacht Cruises:  For front-row views of the fireworks, join World Yacht Cruises for their Classic New Year’s Eve celebration. Cruise around Manhattan while enjoying a five-course dinner, open bar and live entertainment all night long. Tickets for the New Year’s Eve Classic Cruise also include party favors and a midnight champagne toast. Boarding is at 9 pm, and the cruise sails from 10 pm to 1 am. The fun continues with a dockside party until 1:30 am. Tickets begin at $231.95, not including taxes and fees.

Madison Square Garden:  Madison Square Garden has invited two of the largest names in dance music for this year’s performance:  Diplo and Skrillex. The two will be performing their own sets during the evening. This is an age 18+ event. More info here.

Cathedral Church of St. John the Divine: This year’s New Year’s Eve Concert for Peace at the Cathedral of St. John will feature soloists Jamet Pittman and Gregory Purnhagen. This annual show, filled with music and candles, has a limited number of general admission seats that are free and open to the public. Ticketed seating is also available starting at $30.

Hilton Garden Inn Staten Island:  Celebrate the start of 2015 at the New Year’s Eve Gala at Hilton Garden Inn’s Nicotra’s Ballroom. Ticket prices begin at $149 per person and include a lavish cocktail reception, gourmet dinner, DJ, dancing, a champagne toast, and live feed of Times Square. For those interested in staying the night, hotel packages start at $545 per couple with entry to the New Year’s Eve celebration and a buffet breakfast the next morning.