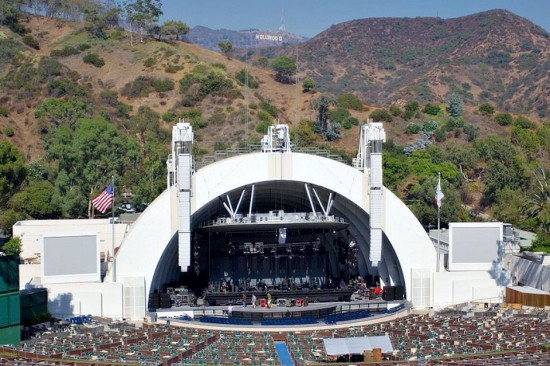 An evening of music under the stars doesn’t get much better than when you’re sitting in one of the most legendary natural amphitheaters — the Hollywood Bowl.  And if your California holidays permit, scheduling in a concert or visit to this venue is a wonderful summer treat.

The Hollywood Bowl was originally built in 1922 and it first consisted of simple wooden benches set against the natural hillside of Bolton Canyon.  That same year the first Hollywood Bowl concerts were scheduled when the Los Angeles Philharmonic orchestra began its first season of “music under the stars,” a tradition that continues today as the Bowl serves as the summer home of the orchestra.

Fast forward to today:  With seating of about 18,000, the Hollywood Bowl is the largest natural amphitheater in the United States.  It is still the summer home to the Los Angeles Philharmonic, and also home for the Hollywood Bowl Orchestra.  The beautiful setting is also home for other events including music festivals, commencement exercises, movie filming, fireworks, movies set to music, and concerts representing a variety of musical genres.  The popular SummerSounds, a summer arts festival for children, is also held at the Bowl.

After the decision on which concert to go to, the most important decision is deciding where to sit. Seating is available in three different general categories.

Each seating category is further broken down by specific location, placement, and amenities offered.

Hollywood Bowl concerts are generally presented during late June to early October on Tuesdays through Sundays.  The Bowl is also leased out to a variety of concert promoters at various times throughout the year.  You can check out the schedule of events and ticket information to find something that will interest you.  Some of the orchestra concerts during the Summer Festival season offer tickets as low as $1 a seat!

But it’s not just about the music, right?  At the Hollywood Bowl you can bring in your own food, or purchase on site.  You will need to check the specific performance to see if alcohol is permitted, but many times you are allowed to bring in a bottle of wine along with your picnic.  And don’t forget to look up to this hills – you’ll see the famous Hollywood Sign overlooking the area.

Also on the grounds is the Hollywood Bowl Museum, an exhibit covering the history of the bowl, along with changing musical exhibits.  It includes an interactive exhibit that allows children to try their hand at making music.  The museum is open Tuesday – Saturday, 10 am – showtime, and on Sunday 4 pm – showtime.  Off season museum hours are Tuesday – Friday, 10 am-5 pm.  Museum admission is FREE.