US Supreme Court is Open for Public Visits

With the recent retirement announcement of Justice John Paul Stevens, the Supreme Court is getting a lot of attention.  The highest court in the land, charged with ensuring equal justice under law, occupies a majestic building of classical Corinthian style, and is located across from the US Capitol Building and the Library of Congress in Washington DC.

The Supreme Court, both the building and the court itself, has always occupied a special place for me.  Perhaps it was those years in law school spent studying the decisions of the Court.  Perhaps it’s because these are supposed to be the best and brightest legal minds.  Perhaps it is because these life time appointments are steeped in legal wrangling and maneuvering the likes of which are rarely publicly seen.  Whatever the reason, the Supreme Court building always instills me with a sense of reverence. 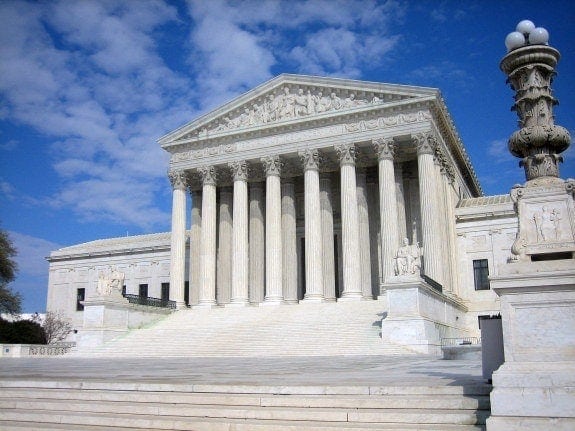 US Supreme Court in Washington DC

As you enter the front doors, you pass through 16 marble columns, above which is inscribed “Equal Justice Under the Law.” Passing beneath this phrase is a sobering moment for me, representing all that is fundamentally right about our system of jurisprudence and the checks and balances in our judicial system.  Of course we have some flaws, but the Supreme Court is one of those humbling institutions that make me proud to be an American.

Entering the building takes you through the grand corridor that eventually leads to the Courtroom.  Along the corridor are busts of all the former Chief Justices of the court.  Stop and take a look, and see if you can recall any of the name.

At the end of the corridor is the Court Chamber, a room 82 by 901 feet and flanked by 24 marble columns.  The focal point of the chamber is the raised Bench where the Justices are seated when Court is in session.  This is where oral arguments are heard, and despite the mighty issues that are argued here, the room itself seems quite small.

All oral arguments are open to the public, although seating is limited.  Unless you are party to the argument or a member of the Supreme Court Bar, seating for oral argument is available on a first-come, first-served, basis.  If you want to hear oral argument, there are two visiting options:  attending the entire argument or attending for a portion of the argument (three minutes).  Separate lines queue up on days that the Court is in session. 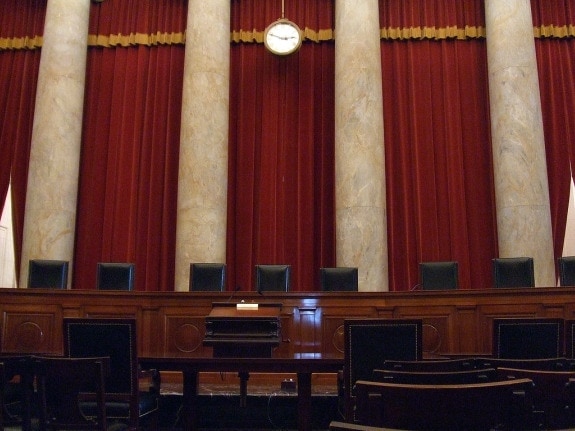 The courtroom where the Supreme Courts Justices hear oral agruments

On the lower floor of the building are portraits of the justices, some scale models of the Court, and a variety of historical exhibits.  The floors of the Court are connected by an impressive marble staircase, which can be viewed from locations on both the main and lower floors.

Security measures are in effect at the Supreme Court, and all visitors must go through a security checkpoint.  Weapons and other dangerous or illegal items are obviously not permitted.  When the Court is in session, other prohibited items include:  cameras, radios, pagers, tape players, cell phones, tape recorders, electronic equipment, hats, overcoats, magazines, books, briefcases and luggage.  Sunglasses, identification tags (other than military), display buttons, and inappropriate clothing may not be worn in the Courtroom.

Location:  The Supreme Court is located at One First Street N.E., in Washington DC (map), across from the US Capitol Building (map) and the Library of Congress (map).  It can be reached by subway (Blue and Orange Line, Capitol South stop, and Red Line, Union Station stop).

Hours:  The building is open 9 am – 4:30 pm, Monday through Friday, and is closed Saturdays, Sundays, and federal holidays.  You can obtain a list of the oral argument schedules at the Supreme Court’s website, or by calling the court at (202) 479-3211.  Public lectures about the Court are offered in the Courtroom on the hour and half hour, 9:30 am – 3:30 pm on days that the Court is not in session.