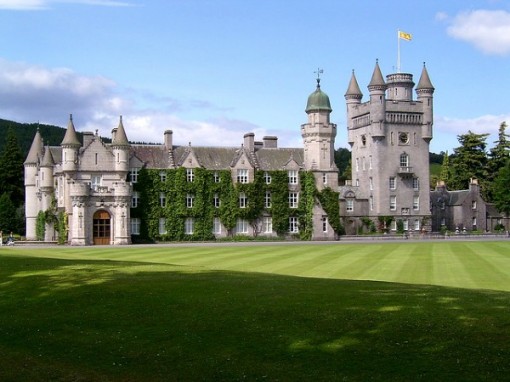 Located in the highlands of Aberdeenshire, Scotland, Balmoral Castle is a large estate house best known as one of the residences of the Royal Family.  It was originally purchased by Queen Victoria, who razed the home and rebuilt it from the ground up, and has been owned by successive monarchs since that time.  The working estate covers about 49,000 acres, and has managed herds of deer, cattle, and ponies. With a mix of rugged topography and manicured gardens, it’s easy to understand why the Queen loves her highland holidays at Balmoral.

Also on the estate:  Birkhall, where Prince Charles and Camilla, the Duchess of Cornwall spend their summers, and Craigowan Lodge, where other royal friends and family stay.  There are also six smaller cottages on the property that are available for rent.

While your stay in your Scottish cottages may not be as grand as the Royal Family’s, you can visit the grandeur of Balmoral – if only for a short time.  The formal and vegetable gardens are open to the public, along with a variety of exhibits, including  The only interior look you’ll get of the castle is the Ballroom – all others are the private quarters of the Queen and are closed to the public.  Throughout the year there are also a number of guided walks and luxury land rover safaris, lead by the Ranger Service, that will give guest a chance to check out the Scottish wildlife.  The safaris are offered twice daily, April-June, and weather permitting is late October-early December.  The official website will list dates and details.

Some other interesting tidbits about Balmoral:

You can visit Balmoral on your own or, if you prefer, contact one of the many tour operators offering day tours to the castle.  You can see the sights of the Balmoral estate is an hour or two, but in nice weather plan on taking a little more time to enjoy the day.  There are plenty of trails and guides paths to wander and enjoy this beautiful estate in the Scottish highlands.

Location:  On the south bank of the River Dee, midway between Ballater and Braemar.  The location is secluded, and requires a car or tour bus to access.  The nearest rail station is in Aberdeen.

Value added:  You can use your Balmoral admission ticket to receive a 10% discount on a visit to the Royal Yacht Brittania, located at the Ocean Terminal, Leith, Edinburgh.