I’m not a big fan of Halloween.  It’s not for any particular religious or cultural reason, I just don’t like dressing up in costumes and begging for candy.  OK, as adults that’s not exactly how we celebrate Halloween, but I don’t particularly care for the adult version of the holiday either. 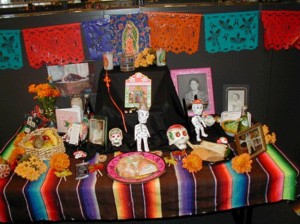 But, this is a great time to be in Mexico, as they prepare for the Dia de Muertos, or Day of the Dead celebration, an extended holiday time that covers Young Souls Day (October 31st), All Saints Day (November 1st) and All Souls Day (November 2nd).

The celebration of the holiday varies within the country, but the observation of the Day of the Dead goes back to pre-Hispanic Mexico – back to the time of the Aztecs, Mayans, and other indigenous peoples of Mexico.

The belief behind the celebration centers on the concept that the souls of the deceased return annual to visit living relatives, and to eat and drink with them.  It would be appropriate, then, to make sure their return was celebrated with feasts and festivals that honored the departed loves ones.  It’s a way of maintaining the tradition and belief that our loved ones don’t every truly die, but are with us, even if only in spirit, forever.

In keeping with the tradition that our loved ones come back once a year, families celebrate Dia de Muertos by creating altars that honor and welcome their departed loved ones.  They are usually decorated with marigolds, candles,  and photographs of the deceased, and have offering of their favorite foods, beverages, and small trinkets representing the interests of the deceased.  Calabaza en Tacha, candied pumpkin bade with cinnamon and brown sugar, is often placed on the altars as well.  Other symbols you’ll see during the celebration include skulls, often laid on altars, and dancing skeletons. 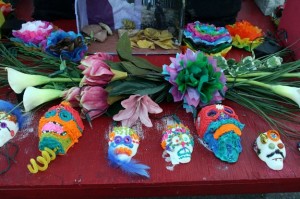 Children exchange decorated sugar skulls that are created to represent the deceased, and these can often be quite elaborate works of art, not merely candy.  The sugar skulls are gifts for the young souls of deceased children, who return in the late afternoon of October 31st, Young Souls Day.

Pan de Muertos, or Bread of the Dead, is another tradition.   Families make the special bread, then gather to remember their loved ones, sharing the bread with one another as a sign of love and the strong ties of family.

If you’re traveling in Mexico during this time of year, you’ll likely see altars all over the place.  At hotels, in a corner of a restaurant, in many other public placs, as well as in private homes.    You’ll also find many cities across the United States that have Dia de Muertos celebrations.  These are often found in cities with a large Hispanic community.

Rich in history and tradition, Day of the Dead observances are festive, happy times.  If you are fortunate enough to be invited to a celebration, consider it a very high honor.  Go, enjoy, and have a good time, but don’t forget that in midst of the merriment, reverence in still important.