Pamplona’s Running of the Bulls 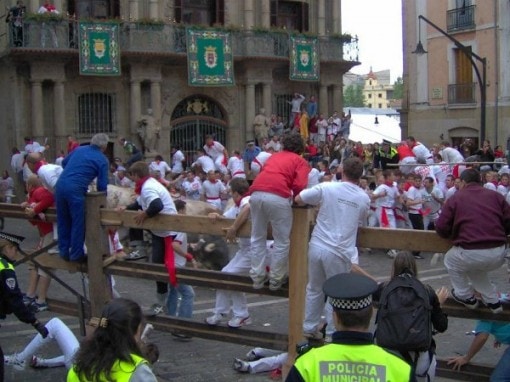 Each year, on July 6th, the San Fermin Festival kicks off in Pamplona, Spain.  It’s a festival filled with tradition, one of them a crazy, adventurous, daring, and downright dangerous tradition.  It’s the annual running of the bulls through the streets of the town.  The running of the bulls originally started as a practical means to move the bulls from one part of the town to the other.  Since those original days, it’s been romanticized in books and film – Ernest Hemingway said running with the bulls fueled his creativity – and now it’s become a tradition attracting visitors from around the world.

The bulls run the half mile course every day of the fiesta at around 8 am, with six bulls and a hundred or so people, many of whom are alcohol-fueled.  Runners wear white shirts with a traditional red scarf tied around their necks, and every year a few of them are gored or otherwise injured.  It doesn’t seem to diminish the festivities, although the more sane festival goers take refuge on a balcony overlooking the streets to watch.

The Festival of San Fermin runs July 6 – 14th, and starts and ends at the stroke of midnight on the respective days.

Would you run with the bulls?  Or watch from the balcony?