In Boston’s North End you’ll find the small wooden home that was the starting point for Paul Revere’s infamous ride.  He lived in the home with his wife, five children, and mother, remaining in the home long after the ride that made him a legend.  The house was eventually sold around 1800. 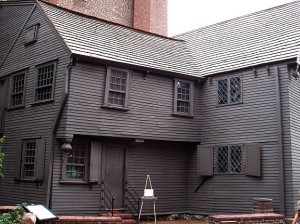 The Paul Revere House still stands today and is downtown Boston’s oldest building.  The home was opened as a museum in 1908, one of the first historic house museums in the country, and today it is one of the few buildings remaining from the colonial era.

Although it has been renovated substantially over the years, about 90% of the building is original back to 1680.  Some of the original items include two doors, three window frames, and portions of the flooring and rafters.  The heavy beams and large fireplaces were typical interiors of colonial homes, and the upstairs chambers contain furniture believed to have belonged to the Revere family.

This is a popular spot for school groups and families, and during spring break and summer there can be a long wait to get in.  Once inside the house, it will take about a half hour for a leisurely walk through.

Special Note:  There are no public restrooms on site, so plan accordingly.