Bottoms Up: Grappa in Italy

Everywhere you turn in Italy you’ll find grappa, a clear alcoholic beverage sure to knock your socks off.

Grappa is made from the grape residue left over from the crush of grapes during the winemaking process, and includes the grape skins, stems, seeds, and everything else.  Like many food items in Italy, the beverage originally began as a way of reducing waste and using everything up. 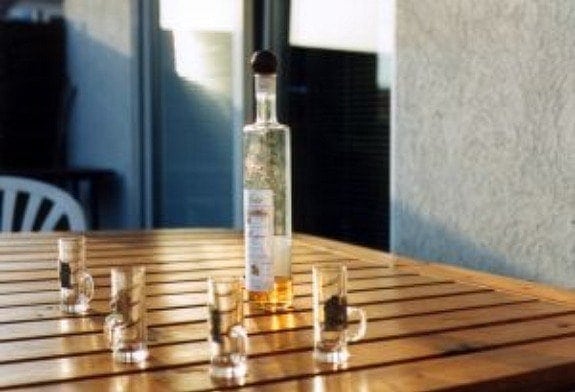 Today, however, grappa stands on its own.  Like wine, the flavor of grappa will depend on the type of grapes, growing conditions, and terroir.  But grappa isn’t wine.  It;s a clear liquide, with an alcohol content ranging from 35-60%, and is thick in taste and feel like Brandy.  In fact, you’ll often hear it referred to as Italian Brandy.  Production is a strictly regulated process, and for a liquor to be called grappa it must be produced in accordance with very strict standards and conditions.

Grappa is primarily served as an after dinner drink as a digestivo, supposedly to help you digest the wonderful meal that you’ve just finished.  It’s poured into a small cordial glass, then finished off in one long sip.  It’s may be served alongside a cup of espresso.  It can also be added to the coffee, making a strong and powerful finish to your dinner.

It’s said that grappa is an acquired taste – and one that I’ve not quite acquired the taste for – but my travel companions are fans.  We picked up a bottle when we were setting in supplies, and they have a glass or two to end every evenings.