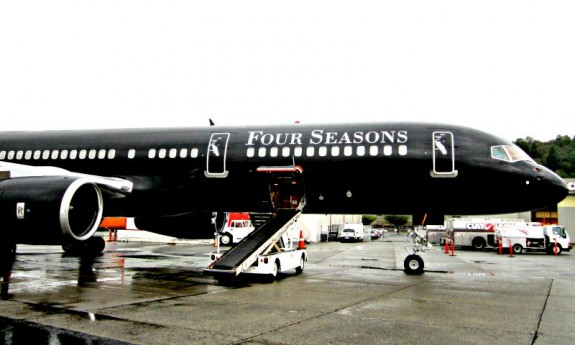 Somewhere over the Pacific Ocean, 52 passengers are embarking on a round-the-world luxury tour the likes of which I can only imagine.

The itinerary is an enviable one:  eight countries and 24 days, all in Four Seasons luxury whether inflight or on the ground. The tour starts in Seattle, which was how I got a look at the jet parked at Boeing Field, and then heads off to Tokyo, Beijing, Maldives, Serengeti, Istanbul, St. Petersburg, Marrakech, and finally ends in Boston.

It’s an enviable way to go around the world, so let’s take a closer look at what life on this private jet is like. 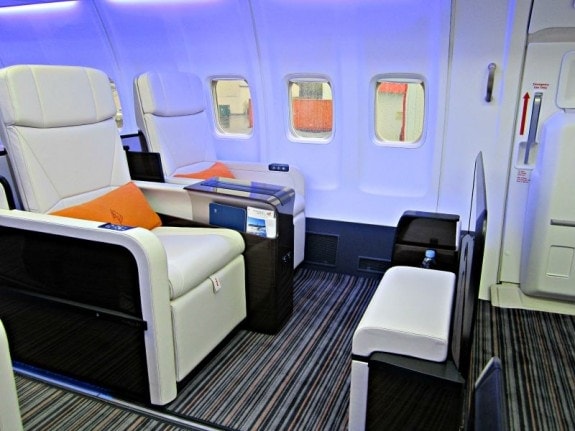 The inside of the Boeing 757 is bright and spacious, with a hint of interior mood lighting that must come in handy during the long flight legs.

The 52 adjustable flatbed seats offer passengers 78 inches of personal space. The seating area has in-seat power and USB outlets, global wi-fi where available, and an on-demand entertainment system; iPads and Bose noise-cancelling headsets are also provided. A privacy screen is located behind each seat, and an ottoman is located in the front seating area as a place to store bedding and hold your personal items.

Since it is presumed that you are traveling with the person seated next to you – the overwhelming percentage of guests on these tours are couples, there is no privacy screen separating the two seats. That really would be a nice touch, even if you are traveling with a companion. I often want to read or work while my husband wants lights out to sleep. A supplemental reading light, in addition to the overhead one, would also be nice. 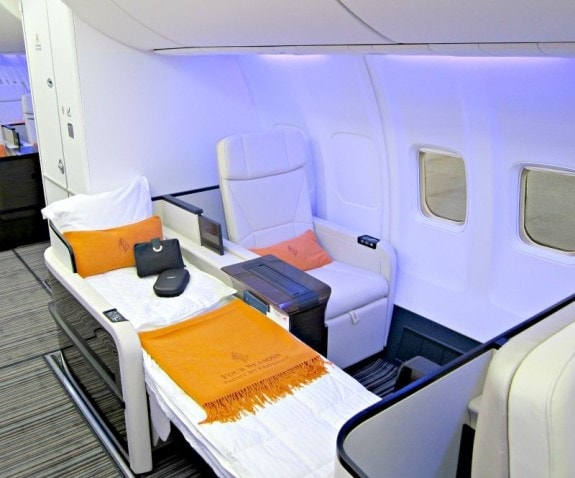 The seats fold down and out for sleeping, with electronic controls that help you get the perfect pitch and angle for your personal comfort. The sheets are high thread count, the blanket and throw pillow are cashmere, and it would be pretty easy to settle in for a great sleep at 35,000 feet.

I didn’t notice a spot to place the iPad for viewing, so I’m not sure how you recline and watch a movie. There’s got to be a plan for that, but I didn’t see it during the tour, nor did I find a photo which showed the inflight entertainment system in use. It’s a little thing that left me curious.

There was plenty of ooohing and aaahing during the tour of the jet, but I found myself a little disappointed. I am NOT a traveler used to luxurious splendor, but I have flown in business class on a few of the Asian carriers, and I found this cabin measuring up in some ways, but not in others. 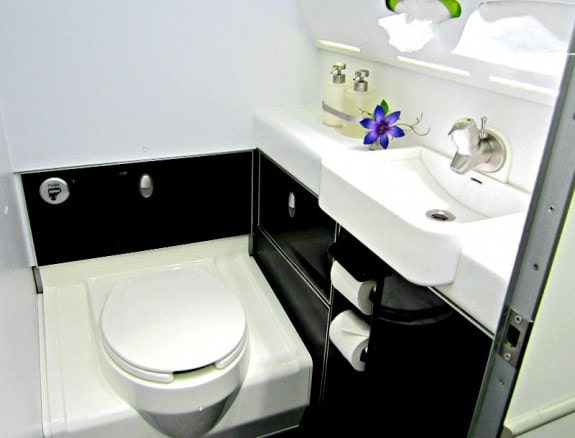 The bathroom, for example, was rather ordinary. The space was standard and wasn’t enlarged when the plane’s interior was reconfigured. It was bright and sparkling clean and filled with high quality products, but missing were those little upscale touches that can be provided in a larger bathroom. There was no changing platform on the floor, nor was their a full length mirror, both amenities that have become standard in many business class cabins. Again, this isn’t the end of the world, and I sound like an airplane prima donna, but at the price point of these tours (over six figures) I wonder if guests would notice these things were missing.

As I was reflecting on my disappointment of the jet, I realized that I was comparing it against other more luxurious aircraft interiors. What was wrong with me? That wasn’t a fair comparison.

With a shift of attitude, I realized that the jet provides an incredibly comfortable space to occupy your time as you travel around the world. It’s spacious and relaxing, and comes accompanied with a staff and crew who are there to make sure that you have the most marvelous trip of your life.

Flights are staffed with a concierge and an onboard chef (on this tour it was Chef Kerry Sear, chef at the former ART at Four Seasons Seattle) who, to the extent possible, sources local products for the menu. The plane is staffed with eight flight attendants, and a pilot crew of four (two captains, a first officer, and a flight engineer). A catering assistant and operations coordinator help make sure everything runs smoothly from point to point to point. A phsyicians accompanies the tour as well.

So what is the Four Seasons experience that makes this round-the-world trip so popular? What would make someone want to plunk down over $100,000 per person (pricing varies based on itinerary and for 2016 is between $106,000 and $132,00 per person, based on double occupancy)?

Before the guest arrives in the destination city, great care is taken to make each guest touch point an outstanding experience. Each destination comes with a variety of tours and activities, and if you want something special, there are people to make sure that you get it. Make plans far in advance, or at the last minute when you arrive, there are staff who are there to accommodate your wishes.

I chatted with Javier, the concierge, who explained that he wanted to know every guest’s preferences so that he could make sure that they wanted for nothing. In other words, he’s there to make sure he knows what you want even before you know you want it. I asked Javier what was his favorite Four Seasons property. He wisely responded whichever one is was laying his head in. On this trip, though, he said he was most looking forward to Beijing. When he’s not on one of the Four Season jet trips, you can find Javier at the Four Seasons Washington DC.

What do these private tours include?

There are four Four Seasons private jet trips next year, with departures in January, April, September, and November. If you’re ready for a bucket list, once-in-a-lifetime experience, this could be it.

Special note for my aviation and airline friends:  There are no crew quarters onboard the plane. In addition to the space in the galley (which is a standard 757 galley), there is a crew resting area found in the last row of the plane. It’s not quite as spacious (three seats to each side as opposed to two), and the seats do not lie flat, and have much less legroom. Although the crew does not stay at Four Seasons properties, one flight attendant assured me that they stayed in very nice hotels, and that tours and activities were arranged for them. They are off duty when they are in layover cities and do not need to remain on call. 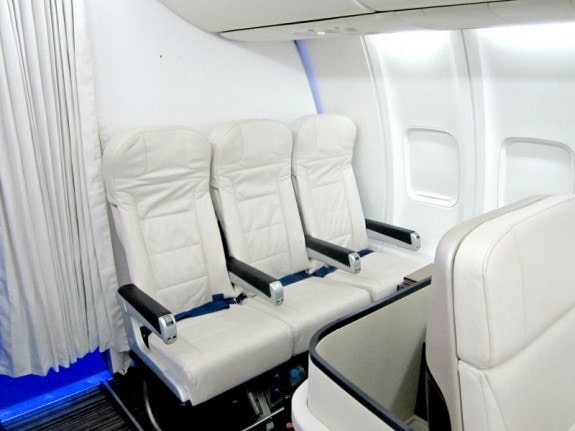