Turning on the news these days inundates us with struggles for democracy around the world.  Even here at home, there are reminders to be ever vigilant about our civil liberties and individual rights, and I cannot even imagine a life in which women couldn’t vote or didn’t  have individual freedoms.  But the history is not all that distant.  To honor the continual struggle for equal rights, and to celebrate National Park Week, why not take the family to the Women’s Rights National Park in Seneca Falls, New York.

The first Woman’s Right Convention was held in Seneca Falls, New York, in 1848 when five women organized a meeting to protest the laws and customs that discriminated against women.  While those determined, courageous women are long gone, a visit to Seneca Falls today will allow you to “meet” the women via a group of bronze figures created by sculptor Lloyd Lily.  The figures include Elizabeth Cady Stanton (who was one of the authors of the Declaration of Sentiments that declared that all men and women are created equal) whose farmhouse is also on the site.

Park rangers lead tours of the farmhouse, sharing information about the life and writings of this rather radical (for her times, at least) woman.  The park also includes a Visitor’s Center, the Wesleyan Chapel (in the photo above), where the first convention took place, and the homes of two of the other women organizers, Jane Hunt and Mary Ann M’Clintock.  You can see the park by participating in ranger-led tours or wander about on your own.  Dial and Discover, an audio tour available using your cell phone, will guide you through five of the park locations.

If you want to understand the struggle for women’s suffrage, if you want to pass a legacy of the women’s movement on to your daughter, if you need a reminder that it only takes a few people to launch a world-changing movement, a visit to the Women’s Rights National Park will be a moving experience.

Add this to your favorite Pinterest boards as a reminder of women’s suffrage and rights. 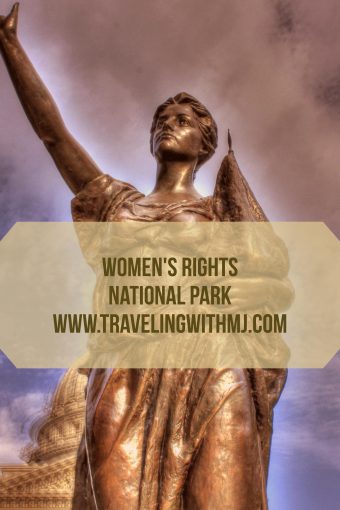