For the price of a hand of blackjack or a roll of the dice, you can spend some time with predators of a different kind — at Mandalay Bay’s Shark Reef Aquarium.  The only predator-based aquarium in the United States calls the Mandalay Bay Hotel & Casino (3950 Las Vegas Boulevard South, Las Vegas, map) home. 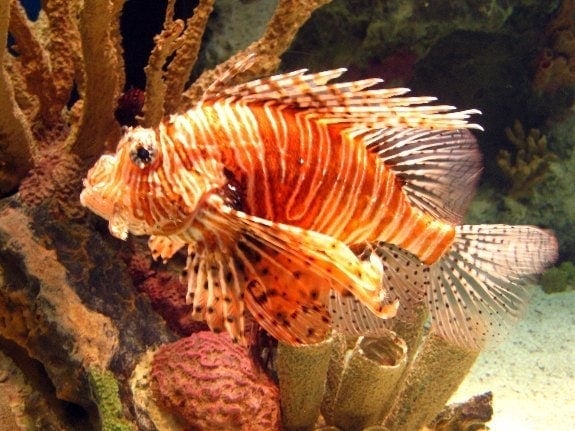 The lionfish is cute looking, but you don’t want to run into him

Tigers Sharks.  The second deadliest specie behind the Great White, these two females are quickly becoming the prima donnas of the aquarium, and it’s the only place tiger sharks are available for viewing in the US.  You’ll be able to spot them easily with their tiger-striped markings and sharp-serrated teeth.

Komodo Dragon.  What they lack in looks, they make up for in speed, and the world’s largest lizard uses both its speed, cunning and power to track and kills it’s prey.  They’re so ugly that they’re kind of cute, but make no mistake about it, these guys are deadly.

The piranhas.  A guide was standing near the exhibit to answer questions, and the question on everyone’s mind was – when do you feed them?  He explained that they are fed three times a week.  Their diet is primarily raw chicken, chopped up into small chunks and then thrown about the water so that the piranhas disperse and chase the food.  By keeping the food spread out in the water it helps to  avoid any injuries to the fish as a result of their gluttonous eating habit.

The stingray petting pool was a big visitor favorite, and mine as well.  A naturalist nearby gave adults and kids instructions about how to “pet” the stingrays swimming about the shallow pool.  I shoved up my sleeves and put my arm in the pool waiting for the stingray to swim by.  When it did, I ran one finger along the top of him.  It’s hard to explain what it felt like.  It was soft and spongy, but definitely not what I expected.  The closest I can come to describing the feel is that it’s like injera, the Ethiopian pancake-like bread.

Shark Reef Aquarium has lots of different kinds of sharks

I’d recommend allowing an hour or so to walk through the exhibit, listening to the audio guide as you do.  The audio guide provides a nice enhancement to what you’re seeing, giving you two choice:  just the basics or a more in depth explanation.  I used the basic info most of the time, pressing for more details on those exhibits that really captured my attention.

Shark Reef Aquarium is open daily starting at 10 am.  Admission is $16.95 for adults, $10.95 for children, and toddlers four and under are FREE.   Shark Reef has just added an annual pass option, $40 for adults and $25 for children 5-12, which saves a bundle if you’ll visit often.  Nevada residents get a discount on admission; ID required.  Tickets can be purchased online or on site.