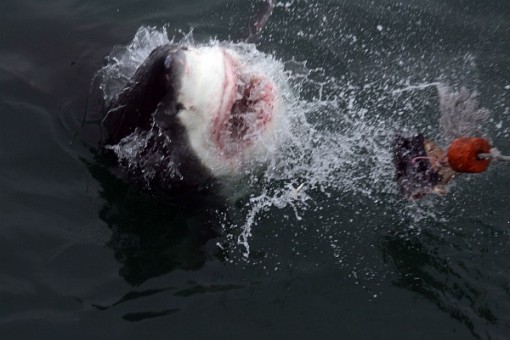 South Africa is known for many activities most notably wine and safaris.  However, in Cape Town, South Africa there are even more possibilities – some fantastic water experiences – particularly since the city sits near the exact spot where the Atlantic and the Indian Oceans meet.  Folks often head to Cape Town for some downtime after a wildlife safari, but how about an added adrenaline rush of a shark cage dive.  After viewing the wildlife on safari, get up a little closer and try swimming with Jackass African penguins.  Or for something a little less active, you can go whale watching from the shore or on a boat, giving you plenty of opportunities to admire the grace and beauty of the migrating Southern Right Whale.

Feel the Adrenaline as you Shark Cage Diving

This adrenalin rush of an adventure activity usually begins around Dyer Island near the fishing village of Gansbaai.  Aptly called “Shark Alley,” this area is a breeding ground for marine life including Cape Fur Seals, thus attracting the feared predator, the Great White Shark. In order to dive you must have a valid scuba diving certificate; some outfitters offer experiences that are just snorkeling, so be sure to ask before booking.

The boat normally locates where the sharks are actively feeding each day and then five to six divers at a time are allowed down in a steel enforced cage.  Each group is down in the cage for about 15 minutes and the cage is situated next to the side of boat using what is called a “hookah system” in which the diving cylinder remains on the boat with the air hoses running into the cage.
A bird’s eye view, you bet, and often the shark might even brush its tail against the cage.  Curious by nature, the sharks often come eye to eye with divers while feeding, so you’ll have a shark’s eye view that few people have ever experienced.

The shark cage diving trip normally takes an entire day or about 11 hours from pickup to drop off, depending on the company you use.

If you don’t want to, or don’t have the qualifications for diving, it’s still possible to enjoy surface viewing from the boat. The sharks often get quite close to the surface while feeding, and while it’s not the same adrenalin rush as in the water, it’s still pretty darned impressive.

The Great White shark cage diving season is from May to October for high season; but you can dive anytime of the year and hope for a sighting.

Best done in the warmer weather, swimming with the penguins is a popular pastime at Boulders Beach in Simon’s Town near Cape Town. On the Indian Ocean side, Boulders Beach is a National Park where you might be laying on your beach towel one minute and then suddenly come face to face with one or more members of the famous colony of Jackass African penguins. It’s easy to just enjoy some laid back time while you watch these creatures, but remember that the area is a sanctuary and it’s their home not yours.

Take a dip in the warmer waters of the Indian Ocean and you can swim with the penguins too.

Curious about the penguin’s name?  This species of penguin, found in only 27 other places in the world, was actually dubbed “jackass” because of its particular Eeyore (from Winnie the Pooh) characteristics.  Much endangered, at Boulders Beach there are as many as 3000 you’ll be able to interact with on the beach year round.

Onshore or Off for Whale Watching

Whale watching in Cape Town normally takes place either from the shore in the nearby seaside town of Hermanus or on a whale watching excursion.  The Southern Right Whales can so easily be seen off the coast that Hermanus has been named the best shore viewing location for whales in the world.

If you want to get out on the water, though, you’ll find excursions lasting anywhere from two hours to an entire day.  On the water you’ll also get the chance to see seals, dolphins and a number of seabirds as well.

Seen off the coast as early as May, peak season for viewing the Southern Right Whale is between August and November. This is the time that the whales migrate from the colder waters in Antarctic to the warmer sheltered water of Cape Town for breeding and birthing.

There are a number of outfitters to choose from, offering experiences and price points at all ends of the value spectrum.  Your  best bet is to ask around once you’re in Cape Town and take recommendations from the folks who have already been there and done it.

Hotels in Cape Town run from simple B&B style inns to luxury properties, so you can splurge on your accommodations and/or your adventure activities.

NOTE:  This post is sponsored by My Destination Info; the opinions expressed are those of the guest travel blogger, Rita Cook.