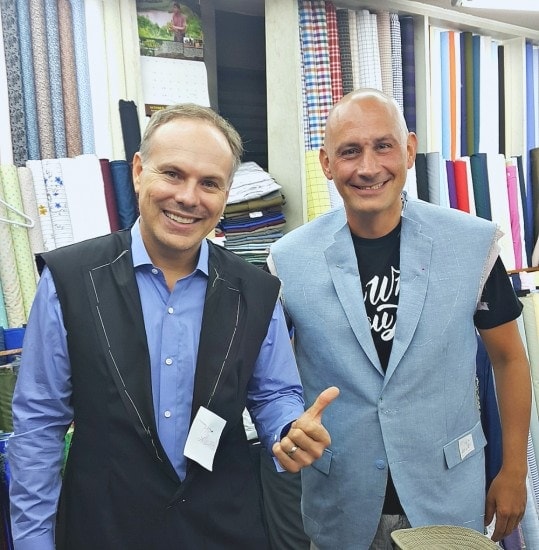 Cleaning out the ill fitting clothing in my closet, and replacing them with items that I love and that fit well, has been on my to-do list for far too long. To be very clear – haute couture is not in my budget, and it’s never going to be. I’m a casual kind of gal, and I prefer to spend money on travel and experiences rather than more “stuff.” BUT – buying some custom made clothes has long been on my bucket list.Who knew that a week in Bangkok would be the impetus to get it done.

I was in Bangkok for a conference and received an email from my friend Scott Eddy (in photo, right) letting me know that he was heading off to Jackie’s Tailor to get some new items and inviting friends to join him. Scott divides his time between the U.S. and Thailand, and said this was the only place that he buys his suits and shirts. When I discovered they also make women’s clothing, I grabbed my purse and headed out. Another couple friends, Johnny Jet (in photo, left) and his wife, Natalie, joined me and we hopped a cab and set out through the labyrinth that is Bangkok.

Jackie’s (137 Corner Soi 9, Sukhumvit Road) is located near the BTS Nana Station, and have been in business since 1969, growing a customer base located around the world. There’s no way that I could give you directions there. Grab a cab, give them the address, and they’ll get you there.

Walking into the shop, we were met by Nicholas and Aman, the two brothers who run Jackie’s. Despite a bit of nervousness about the process of buying custom clothes, they both made me feel right at home. Of course, having friends going through the same process at the same time also made for an entertainining experience – who’d have guessed that shopping with guy friends would be so much fun.

In a nutshell, here’s how the selection and fitting process works:

We spent a little time talking about what it was that I wanted. Fortunately, this was easy for me as I had already decided that I wanted a black two piece suit, pants and jacket. I knew that a suit would work for business situations, and hoped to find a fabric that would allow multiple wearing options by splitting up the pieces.

The fabric selection process seemed, at first, to be overwhelming, after all there are bolts (and bolts and bolts) of fabric around the shop in various weights and of varying qualities. However, after discussions with Nicholas and Aman, it was fairly easy to narrow down the quality of fabric that I wanted, and then make a final selection. The selection process also includes selecting a lining from a dizzying selection ranging from staid to psychodelic. Since I’m fairly conservative in my wardrobe choices, I selected a black on black patterned fabric for the suit with a light grey lining.

[tweetthis]Now coming to the U.S., get custom clothes made by a top Thai tailor. [/tweetthis]

Now the fitting process was ready to begin!

I’m not sure what I expected, but it was a far less intimidating process that I imagined. A tailor measures every part of your body that you could imagine:  inseam, leg length, arm length (I have long arms), hips, chest, shoulders, wrists, waist, and more. All are copiously recorded in a notebook for later use.

While the measuring is going on, a more detailed discussion about style takes place. There are a few partially made items in the shop (as in the photo) that will give you a little idea on how various features will look on you. Nicholas and Aman will also have that often difficult conversation with you about what you should and shouldn’t wear. A longer jacket may cover a problem area, slash pockets draw attention away from the hips, and lapel size and shape should be selected to flatter. Every single detail is gone over with you:  lapel size and shape, pocket shape and placement (or even if you want pockets at all), number of buttons, style and length of jacket, belt loops, cuffs, pant leg shape, etc.

This suit is going to be exactly what you like and want, no compromising because you can’t find your preference on a department store rack.

I returned to Jackie’s the next day for a first fitting. The garments were partially made and the tailor was on hand to note the fit. It needed to be taken in a little here, let out a little there, lengths and adjustments were noted, as the fitting process continued.

Since my schedule was now booked for the remainder of my time in Bangkok, Jackie’s arranged to have my suits sent to my hotel for a final try on. Did you notice the plural there? Yes, I decided to get a second one – a chalk blue pinstripe with pink lining.

When the garments arrived at my hotel a few days later, there were still some fit adjustments that needed to be made. The pants fit perfectly, but the jacket was a little too snug across the chest and would limit what I could wear beneath it. I emailed off my concerns to Aman and left the garments with the concierge for a pick up. Less than 24 hours later, the finished suits were returned to my hotel and were a perfect fit.

The entire process, from my first visit to the shop to packing them in my suitcase to head back to Seattle, took under a week. Yes, under a week for beautifully crafted, perfect fitting, custom made clothes, with my sizes and measurements are on file for future orders. Not only am I looking good, but I can check this off my bucket list.

Because Jackie’s has clients around the world, Aman often makes sales trips to the U.S. to see returning customers and meet with new ones.

Aman will be in Seattle next weekend, December 18-19th, meeting with customers to make wardrobe selections. Tony and I plan to meet with him to look at some new fabric selections and order a few items. We thought you might be interested, too. If you’re interested in meeting with Aman to order some custom clothing, you can email him for an appointment. Please tell him Mary Jo sent you. Or, you can leave a comment on this post, or email me, and I’ll introduce you to one another.

If you’re not in Seattle, but would like to meet up with Aman, here are some other locations and dates where he will be. He’ll have a hotel room for fittings and to showcase fabric, or he can make arrangements to visit your office.

A few additional things to know about the process:

Get in touch if you’re interested in meeting up with Aman as he does his crazy scheduling swinging through the U.S.