Paul McCartney Out There in Center Field at Safeco Field 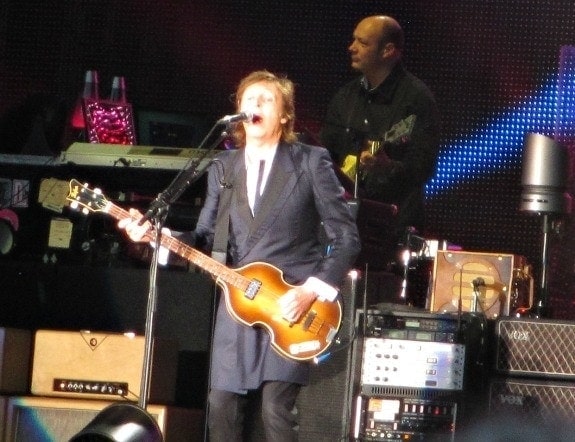 It was big, it was bold, it was Out There last night as Paul McCartney played center field in Seattle’s Safeco Field. For its first major concert held in the stadium, you could hardly go wrong with the legendary Sir Paul, who last played Seattle eight years ago.

What can you say about a musician who has held audiences in the palm of his hand for over 50 years. And who, at 71 years of age, can still headline a show for two and a half hours (including two encores). Oh sure, there were a couple of times his voice showed the age (Yesterday), but there were ten times more that he delivered in spades.

I jumped on buying tickets early (thank you Amex Gold card advance ticket option), grabbing field seats in the middle section. The seats were 32 rows back from the stage, which was erected in center field, too far back to get great photos (these were taken with a simple point and shoot camera), but close enough to feel the heat from the fireworks and staging bombs. I stood for most of the concert (shades of the 70s and festival seating), singing along with songs I’ve been singing along with for decades, while the sweet pungent scent of marijuana wafted through the warm night air. 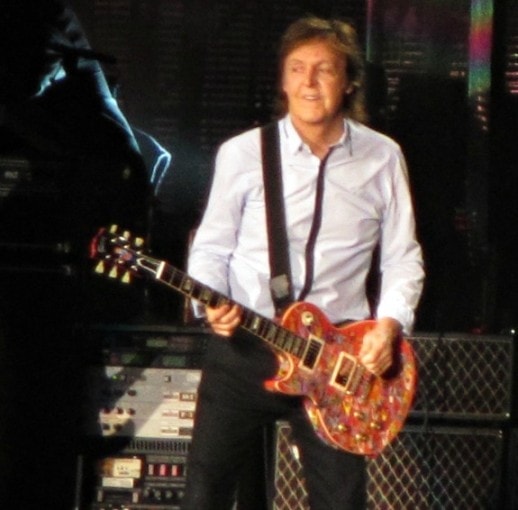 As day turned to dusk, and dusk to late night night, the moon peeked above the stadium in a way that we Seattle-ites have become accustomed to. Sir Paul mentioned it from the stage, a nice reminder not to take our beautiful summers for granted.

Woven into the main set, 30 songs that were consistent with past shows (listed below), were bits and pieces of conversation explaining how some of the songs came to be. Maybe I’m Amazed was written for his wife Linda, who died of breast cancer in 1998, and My Valentine was written for current wife Nancy, whom he married in 2011. The song Blackbird was written about the escalating racial tensions and civil rights movement of the ‘60s. Something, written by George Harrison, was first played on ukulele before morphing into a full orchestration. 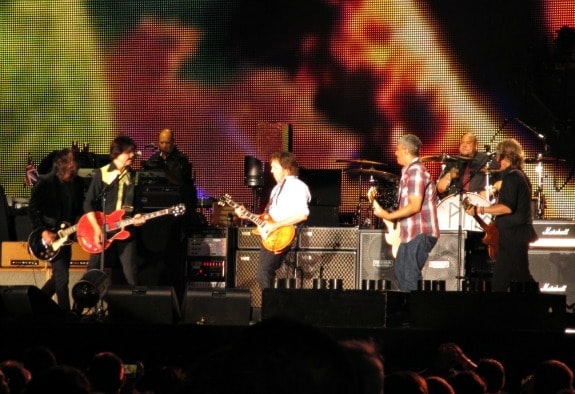 The concert deviated from the standard playlist in the first encore, when the surviving members of the former Seattle grunge band Nirvana joined McCartney on stage, playing Cut Me Some Slack in one of the most impressive jam sessions that I’ve ever seen. Dave Grohl (now fronting Foo Fighters and living in Seattle) invited McCartney to visit in his studio, and the musical collaboration, which continued through both the first and second encore, resulted. Wowza music fans – this was serious rock and roll history.

I’ll leave the music critique to the experts. For me the evening was not about the nuance of the performance, but about a celebration of a 50 year career — a career that accompanied me from childhood to teen years, from college student days into middle age, providing me a lifetime of memories set to music. Paul McCartney had me eating out of the palm of his hand from the first chord. 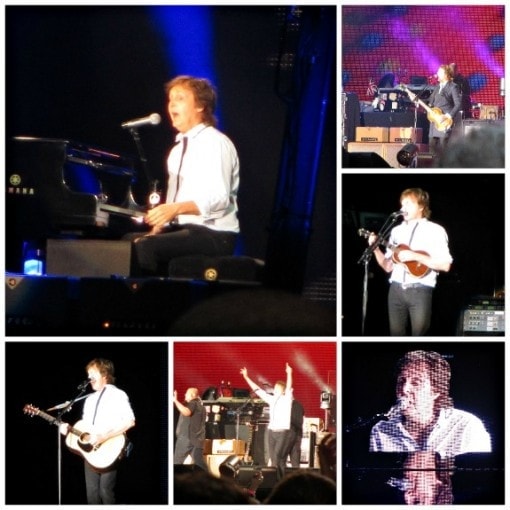 Note:  The great evening was not without its problems, mostly at the hands of Safeco Field operations and personnel staffing the concert.

Patrons with field seating were sent an email about how to secure a wrist band (required) to get onto the field. The two locations to get the wrist bands were directly in front of where other patrons were coming in. I’m sure I’ll have bruises for all the bumping of incoming fans, but that wasn’t near as distressing as staff pushing and shoving guests after they finally made it to the front of the line. There was little room to move or breathe, but that didn’t stop Tim H. from shoving me into the oncoming crowd. Since I’m of the crazy belief that it’s not okay for strangers to touch me, I stopped for long enough to ask for his name, only to be told to just get along with it or I’d miss the concert.

At no point was I ever asked to flash my wrist band to get entry onto the field. At numerous checkpoints, from the aisles leading to the field, from the steps taking me onto the field, to the actual aisle into my row on the field, I once again had to show my tickets. So I ask:  What was the reason for requiring patrons to stand in line for upwards of half an hour for a wristband? And what’s the deal with staff training that says it’s okay to shove patrons out of the way? And in a venue that equipped to hold upwards of 40,000 attendees, why was it so difficult to deal with crowd control? All questions that Safeco management will have to answer if they’re to become a player in the concert venue space.

I hope they get it figured out. While Paul McCartney may have been the first, setting a standard that all future acts will compare to, there are other musicians that could totally rock centerfield.

Photo credits:  all from my personal collection