The Arc de Triomphe: The Triumph of Paris 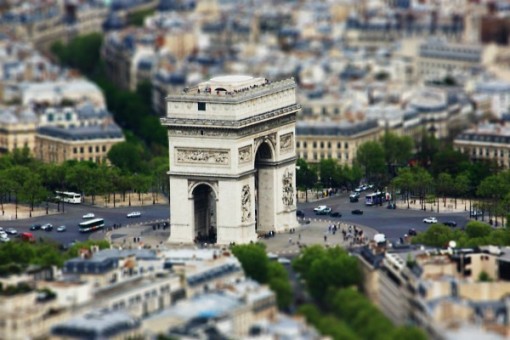 Standing in the center of the Place Charles de Gaulle (also called the Place de l’Étoile) at the western end of the Champs-Élyseés, the Arc de Triomphe is the largest triumphal arch in the world.  It honors those who bravely fought for France, particularly during the Napoleonic Wars, and beneath the arch is the tomb of the unknown soldier from World War I, the grave marked by the very first eternal flame.  The flame burns in memory of those who died, but were not identified, in both WWI and WWII.  The English translation of the inscription reads “Here lies a French soldier who died for his fatherland 1914-1918.”  It’s said that this flame was the inspiration for an eternal flame being placed on the grave of assassinated President John F. Kennedy. 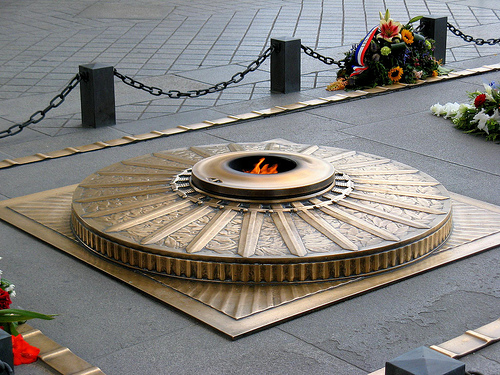 The Arc de Triomphe stands about 165 feet tall, and measures about 148 feet wide, and is surrounded by one of the busiest roundabouts in Paris. Seriously – do not try to dodge in and out of this traffic! Not only is it dangerous, but you’ll quickly be branded as a nutcase tourist.  I stood and watched for awhile at visitors who were tempted to make a dash across lanes of traffic – but didn’t see anyone acting on that temptation.  To reach the arch in a sensible and safe fashion, just follow the signs to the underground passageway that will take you beneath the crazy roundabout to the monument.  Just take a short elevator ride back up to ground level or climb the stairs.  Whew!  You’re there – and you didn’t have to do battle with Paris traffic.

Once at the monument, spend some time walking around looking at the sculptured facade. A few highlights include a winged figure of Victory, a sculpture of Napoleon, and 30 shields (each representing a victorious battle) on the crown of the arch. On the inside and top of the arch are inscribed the names of generals and battles fought, with the names of those who died in battle underlined. Conveniently missing are some of Napoleon’s later battles. 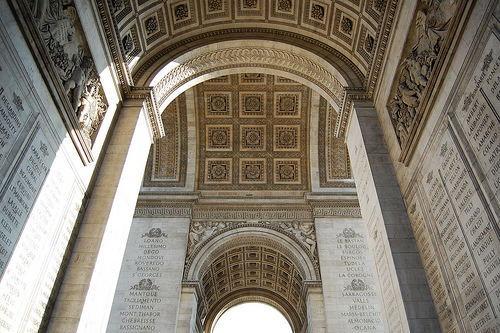 If you’re up to it, climb the 284 steps to the top of the arch. There is no elevator. The steps are stone, and the passageway narrow and circular. It’s okay if you need to stop and catch your breath – most people did, more from a sense of vertigo or claustrophobia rather than fatigue.  Once at the top, you’ll be treated to magnificent views in all directions.

Take a look around and you’ll see 12 major arterials leading into the Place, and as you watch how they merge into the roundabout, you’ll have a real appreciation for driving in Paris. And you’ll be glad you didn’t try to make that crazy dash across the lanes of traffic.  There are fabulous photo opportunities from the top, and  since the Arc is open late, it’s a favorite spot for sunset and evening photos. 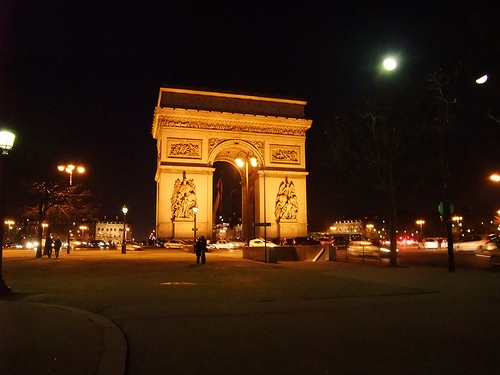 Getting there:  RER line A (train), Metro lines 1, 2, and 6 (subway) both getting off at the Charles de Gaulle-Etoile stop.  Also accessible by numerous bus lines.

Hours:  10 am – 11 pm daily.  Closing is one half hour earlier during the fall and winter months.

Admission:  There is no charge to walk around and explore the base of the arch.  Access to the top is € 9,50 for adults.  Those under 18 years of age (26 years for EU citizens) are admitted free, as are disabled visitors and their escorts, and the unemployed.  Discounts are often available.  Admission is also covered by the Paris Museum Card.

Time:  The ground level of the arch is easily seen in half an hour, allow an addition hour if you plan on going to the top.  That allows time for exploration and photography, but if you want to spend some serious photography time, you can easily spend the day there as you enjoy the light from so many different angles.