River cruising has become a popular option with cruise lovers, offering a smaller, more intimate experience, as well as the opportunity to visit destination not otherwise accessible by larger ships.  It’s also a way many novice travelers choose to visit more exotic locations, providing them with the security and comfort of luxury holidays while still allowing them a bit of adventure.  A little taste of a destination on a cruise often leads to a return visit.

A cruise in Egypt has become a popular choice, giving travelers an opportunity to see an ancient country fully engaged in modern day.  It doesn’t hurt that it has nearly year round sunny weather, either!  And seeing the country on a cruise gives travelers the security of fresh drinkable water, ice, and safe food.

When most people think of Egypt they think of the Pyramids and perhaps the Nile, but there is far more to do and see in this part of the world.

Most luxury cruises in Egypt begin or end in Luxor, the site of the ancient city of Thebes.  Luxor is like a real time history class, with ruins and other historical sites located everywhere you turn.  The city is divided in two by the Nile, with the sides referred to as the East and West bank, and travelers have plenty to visit on both sides. 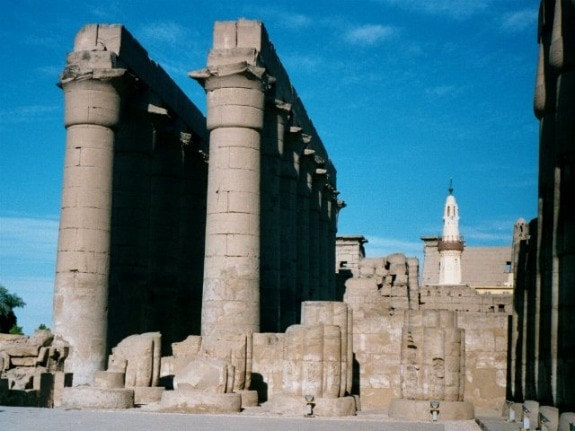 Ancient Egyptians connected the rising sun in the east to the creation of life, and that’s why you’ll find life-giving temples on the East side of the Nile.

Some of the sights you’ll see on the east bank include:

Luxor International Airport is also located on the East Bank.

Valley of the Queens, Luxor

These ancient sites are extremely popular with visitors and tourism is an economical force in the Luxor economy.  Despite the strength of the tourism economy however, visitors are still expect to comply with a few basic customs and traditions while visiting.  These include following rules concerning photography, generally photographing exteriors and purchasing photography permits when required) and to dress modestly and in a way as to show respect when visiting religious sites.  Long sleeves and pants are generally recommended, and bring a heavy pair of socks to wear inside temples as shoes are not permitted).

Egypt is ancient, exciting, and a fascinating mix of old and new.  It on my to-visit list, and seeing it by cruise ship has a great deal of appeal.