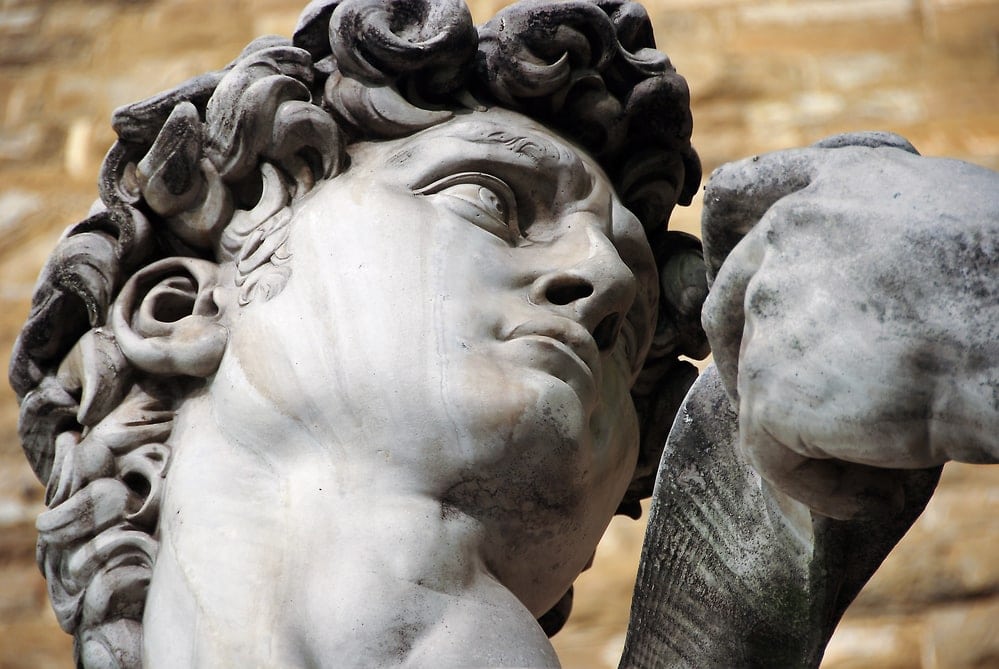 Florence, Italy, attracts millions of visitors each year and is well known for its art – art museums and galleries housing many of the world’s great art masterpieces. It has long been considered one of the most beautiful cities in the world. The city is just one of the many reasons that I love Italy.

Since the 15th Century, Florence has been an economically prosperous city due to an Italian banking family known as the Medicis. Cosimo de’ Medici became a patron of art, science, philosophy, and architecture, which helped the city to become known as the birthplace of the Renaissance. The Historic Center of Florence is a UNESCO World Heritage site, with significant architecture, monuments, and cultural history combined with its art history.

Artists like Leonardo Da Vinci, Michelangelo, Donatello, Botticelli, and Ghiberti created masterpieces thanks to his patronage. Today their work is on display in various museums and cathedrals around the city. Art is everywhere you look – you’ll spot it on any tours and activities in Florence – but we think these nine art masterpieces are the best of the best, serving as a constant reminder of the city’s Golden Age of rebirth.

Artwork: The David by Michelangelo

Location: Originally placed outside the Piazza della Signoria, in 1873, it was moved indoors, and it is now located in the Galleria dell Accademia.

Significance: The ultimate Renaissance Man is almost 17 feet tall. Michelangelo was commissioned to create the work in 1501 to depict a story from the Old Testament – David and Goliath. In the story, David defeats the giant Goliath with just a slingshot using cleverness and the element of surprise.

It is significant because of its realism and merging of art, and science. Michelangelo dissected corpses to understand how the human body worked as inspiration. He created the piece to represent the moment before the battle and therefore, depicted the look of concentration on his face and the tense muscles of his body. The placement outside the seat of government symbolized the determination of Florence to show its readiness to defend itself.

Artwork: The Birth of Venus by Sandro Botticelli

Significance:  Venus is born from the sea as a fully formed woman. She is blown to shore by the west wind, standing in a scallop shell completely nude, only covering one breast with her hand, suggesting modesty.

Botticelli painted the work around 1484 and used a thin tempera paint that was almost transparent. He painted on canvas which was unusual for the time. What is also noteworthy, is that the nude is of Venus, a mythological symbol and not a Christian symbol such as Eve. The painting and its symbolism are still debated today. The piece seems metaphysical, illuminated by soft light, and has all the figures in the same line, making it appear flat or two-dimensional. It is the most famous paintings in the Uffizi and an iconic image around the world.

The Gates of Paradise 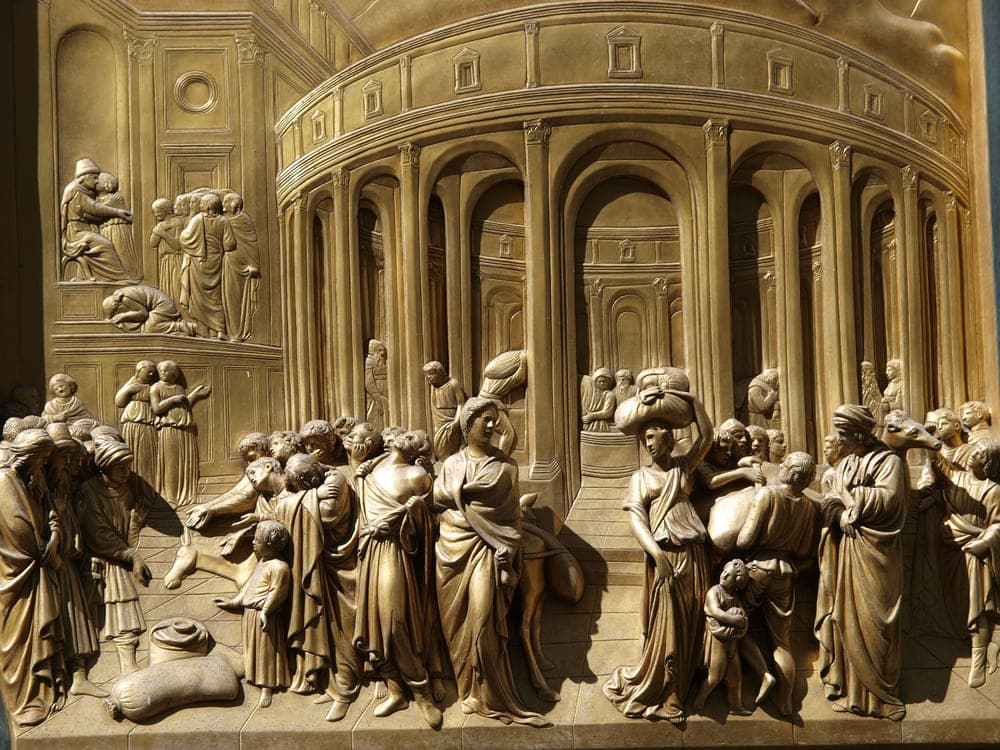 Artwork: The Gates of Paradise by Lorenzo Ghiberti

Significance: The original gates, which were hung on the east side of the Baptistry of the Duomo, were removed due to destruction by the elements. A copy now stands in their place.

The gates are made of gilded bronze and stand 17 feet tall and 9 feet wide. They were commissioned in 1425 and completed 27 years later. The doors are made up of ten panels that depict the Book of Genesis from the Old Testament. The importance of this work is Ghiberti’s innovative use of perspective. The relief sculptures give the illusion of space and reality and are an iconic representation of Renaissance art.

Artwork:13th Century Mosaics on the ceiling of the Baptistry

Location: The Baptistry in the Piazza Duomo, Florence

Significance: Every Catholic citizen of Florence was baptized in this building which was finished in 1128.

A mosaic ceiling was created 100 years later designed by Florentine artists and executed by Venetian craftsmen. The bible stories of the Old Testament are told as well as a depiction of the Last Judgement of Christ, where the images of Hell are gruesome. It is said that Dante may have been inspired by the work. The Baptistry is one of the oldest buildings in Florence, where the technique of Venetian mosaic artistry is featured.

Location: Under the left arch of the Loggia della Signoria

Significance: The complexity and the beauty of this bronze statue was a great feat for the time and a demonstration of the artist’s great skill (Mannerist). In Greek/Roman mythology this work reflects the triumph of Perseus, blessed by the Gods with his winged sandals and helmet, having successfully cut off the head of Medusa.

Commissioned by Cosimo de Medici, Cellini completed the work in 1545. It is said that Medusa was in the sightline of David and Hercules, both statues that represented the Republic, and that she turned those heroes into stone, therefore suggesting that Medici was more potent than the Republic.

The Fresco of the Holy Trinity

Artwork: The Holy Trinity by Tommaso Guidi – known as Masaccio

Location: The left aisle near the main entrance of the Basilica of Santa Maria Novella

Significance: The Basilica is known for some of the most groundbreaking frescoes of the early Renaissance.

Masaccio’s mural of the Holy Trinity was completed in 1428 and is known for its perfect linear mathematical perspective. It was covered by an altar in 1570 and was uncovered during an 18th-century renovation. The fresco depicts God, the Holy Spirit as a dove and Jesus on the cross between Mary and St. John the Evangelist. The architecture of the Basilica is continued into the fresco.

The Procession of the Magi

Artwork: The Procession of the Magi by Benozzo Gozzoli (trained by Ghiberti)

Location: The chapel inside the Palazzo Medici-Riccardi

Significance: The Medici family was given permission by Pope Martin V to build a private chapel on the first floor of their residence. In 1459, Gozzoli was commissioned to paint the frescoes and completed the work 150 days later. The frescoes depict the Three Kings on their way to Bethlehem and extend across the east, south, and west walls of the main room. The family Medici is painted riding in the foreground and constitutes one of the most eminent illustrations of the Medici in Florence.

The Fountain of Neptune 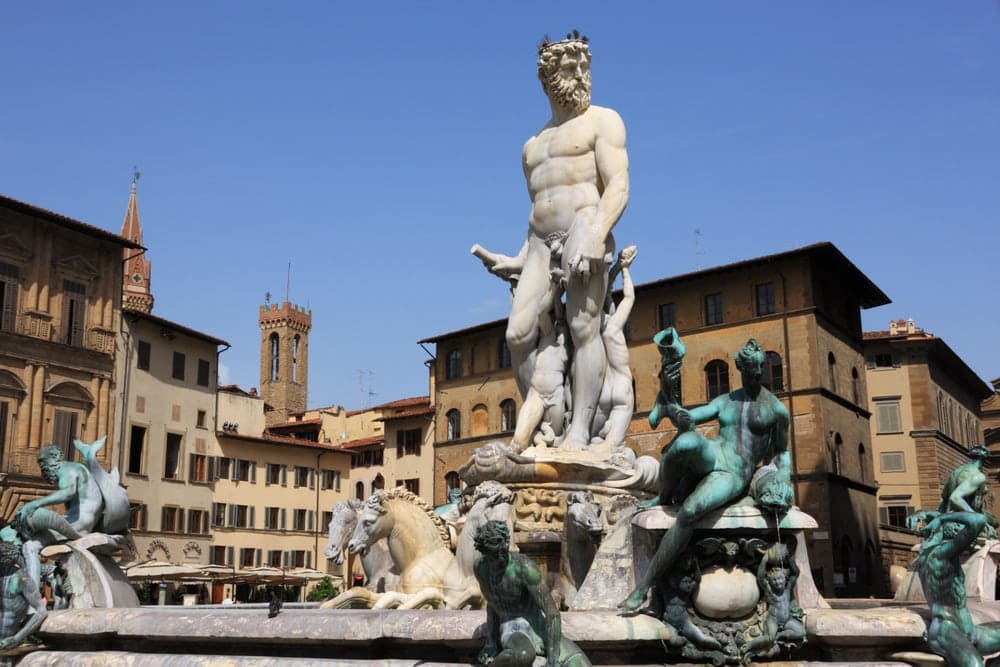 Artwork: The Fountain of Neptune by Bartolomeo Ammannati and Giambologna

Significance: The figure of the God of the sea, Neptune stands on a chariot drawn by four horses. The chariot is surrounded by three Tritons and four ocean spirits sculpted out of marble and bronze.

A competition, offered by the Medici family, awarded the coveted job to Ammannati who completed the work in 1565. The face of Neptune resembled that of Cosimo de’ Medici and was said to reflect his ultimate power over the sea. The townspeople saw it as a waste of marble.

Artwork: The Grotto by Bernardo Buontalenti

Location: The Boboli Gardens located behind the Pitti Palace

Significance: The grotto is a masterwork, a combination of architecture, painting, and sculpture.  The “cave” started by Giorgio Vasari and later continued by Buontalenti began in 1583 and took ten years to finish. It was commissioned by Francesco de’ Medici to adorn the palaces gardens as it was fashionable in the 16th century to have a grotto on one’s grounds.

The interior consists of three rooms decorated with magical and allegorical elements. The entrance has stalagmites and stalactites that make it look natural and statues of Ceres and Apollo. The first chamber is dedicated to nature, the second is dedicated to the Trojan War. The third chamber is an egg-shaped oval that represents transformations. It is a perfect example of the Mannerist aesthetic exaggerating qualities of ideal beauty.

Pin this to your favorite Pinterest board and use it to help plan your trip to Florence, Italy. 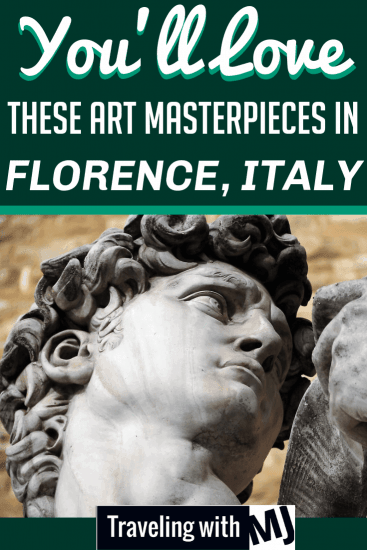