I’m of that age where I remember exactly what I was doing when I heard the news that President Kennedy had been assassinated in Dallas. I was at school and it was recess. I didn’t really understand what the word assassinated meant, but I did know that it was very, very bad. Our teacher gathered the class together and then we were all sent home, where, for the next weeks, we bounced between emotions far greater that a grade schooler can navigate on their own.

This year marks the 50th anniversary of the death of President Kennedy and there are commemorations and memorials aplenty.

In Fort Worth, just down the road a piece from Dallas, the city will remember the life and legend of President John F. Kennedy with a number of events.

In a bit of déjà vu, the Fort Worth Chamber of Commerce will hold a commemorative breakfast on November 22, 2013, 7:30 a.m. at the Hilton Hotel.  Formerly known as the Hotel Texas, the Hilton Hotel is the location where President Kennedy spent his last night and delivered one of his final two speeches. The first, an extemporaneous speech delivered to a crowd who had gathered just outside the hotel with hopes of catching a glimpse of the president. The second, a formal address inside the hotel at the FWCC breakfast held in President Kennedy’s honor. Guest speaker at the event will be U.S. Secret Service Agent Clint Hill, the agent who was assigned to Mrs. Kennedy and was in the presidential motorcade during the assassination of President Kennedy. The breakfast is open only to Chamber members.

Following the breakfast will be a wreath laying at the JFK Tribute in General Worth Square that is open to the public. The JFK Tribute is a permanent open air exhibit built within a 1.5 acre site where President John F. Kennedy presented his last speech to the general public on the morning of November 22, 1963. The tribute was designed around an eight-foot bronze statue that was installed in General Worth Square in 2012. 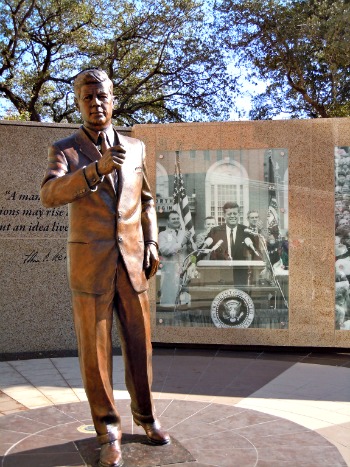 Other commemorative activities include:

Amon Carter Museum of American Art presents Hotel Texas: An Art Exhibition for the President and Mrs. John F. Kennedy – October 12, 2013 – January 12, 2014. This amazing exhibit features the works of art installed in the presidential suite of Hotel Texas, together for the first time since November 22, 1963. The original installation included works by Thomas Eakins, Lyonel Feininger, Marsden Hartley, Franz Kline, Henry Moore and Pablo Picasso, among others. Admission is free.

Casa Manana presents Oswald, The Actual Interrogation – November 9-17, 2013. Based on the interrogation notes of Police Captain Will Fritz, this compelling new play delves into the history and controversy surrounding the 48 hours Lee Harvey Oswald was in the custody of the Dallas Police Department. Tickets are available, but expected to sell out.

Fort Worth Library presents An Evening with Bob Schieffer: Remembering John F. Kennedy – November 15, 2013 at 7:00 p.m. In conjunction with the exhibit, CBS 11 News anchor Tracy Kornet will interview veteran journalist and host of Face the Nation Bob Schieffer about the day the president was assassinated and how the tragedy continues to affect us today. Admission is free.

The Fort Worth Opera presents JFK: A Final Day in Fort Worth – November 21, 2013 at 6:30 p.m. Fort Worth Opera will present a first look at their newly commissioned opera premiering in 2016, JFK (working title), at a special evening of drinks and hors d’oeuvres in the west promenade of the historic Hilton Hotel. Enjoy intimate conversation and an exclusive reading of the opera’s near complete libretto. Tickets are $50 and available via email.