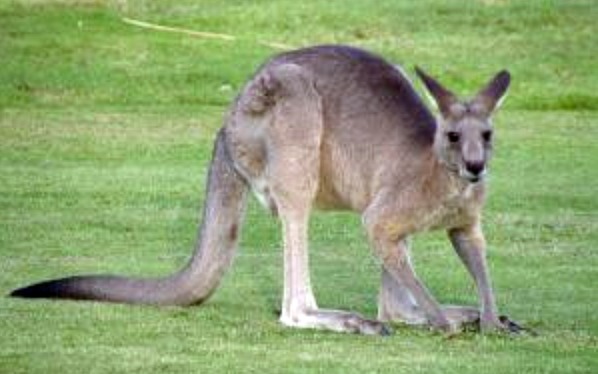 Even well-traveled and jaded adults will succumb to what I call Australia’s “Ahhhhh” factor – the unusual, cute, and often cuddly-looking animals that you’re sure to find on the picture postcards from the smallest of our continents.  While there is much to see on holidays to Australia, seeing the animals always seem to be a part of the experience.

Kangaroos – This hopping marsupial is the iconic animal of Australia, and will be found on the country’s coat or arms, on some currency, and in a variety of advertising.  And although you won’t find them in the major cities, once you venture out into the countryside you’ll want to keep your eyes peeled to make sure you don’t run into one.  Literally.  Those yellow Kangaroo crossing road signs are a serious warning, not a joke.  You can also see kangaroos, and their related friends the wallabies, at national parks, zoos, and animal preserves.  You can also see one on your plate, as kangaroo meat is turning up on restaurant menus touting it as a healthy alternative to other meats. 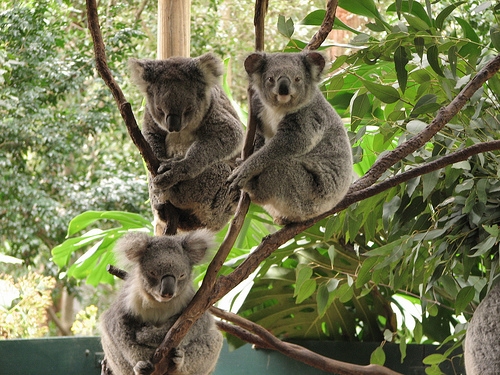 Koalas – These cuddly little creatures are not bears at all, despite the name, but are marsupials (like the kangaroo, they have a pouch).  They range in size from about 10-30 pounds when full grown, and like humans have a hand of four fingers and an opposable thumb – all the better to grip the trees where they live and to grab those tender shoots they love to eat.  Koala are generally found in the coastal regions of eastern and southern Australia, as well as the woodland interiors. They are hard to spot in the wild, but you might try Raymond Island, the Otway Coast, or in Noosa on the Sunshine Coast.  To ensure a sighting, try one of the many wildlife parks and preserves.

Platypus – With a face that only a mother platypus could love, this duck-billed, beaver-tailed creature is also venomous.  While not life-threatening, the venom will knock you for a loop, so it’s probably a good thing that they’re tough to spot in the wild.  You’ll find them in the soft river banks in Victoria and southern New South Wales, usually at dawn and dusk, but better yet, try one of the platypus reserves or a zoo.  You’ll find better known reserves in Brisbane, Sydney, and near Melbourne, and can get referrals to smaller ones.

Wombats – Another Australian marsupial, the wombat was originally thought to be a type of badger.  They can be found in southeastern Australia and Tasmania.  Despite their rodent-like teeth and claws, the wombat looks cute and cuddly, and can often appear to be somewhat tame.  Should you happen upon one in the wild, however, use caution as their bite can cause serious damage.  They are hard to find in the wild, so if you want to see one, check out one of the parks, zoos, or other nature spots that have them on display.  They’re always a crowd favorite.

Echidna – OK, these spiny anteaters aren’t all that cute, but they occupy an interesting spot in the animal kingdom.  They look a bit like a hedgehog or porcupine with a snout. Although you may not want to get too close, they can be seen throughout the country, especially on Kangaroo Island.

Emu – This is the largest bird native to Australia and is often confused with the ostrich (which is native to Africa).  It’s common over most of mainland Australia, especially in the central part of the country.  The emu can’t fly, but it can swim, and with it’s long legs can run upwards up 30 miles per hour for long periods of time.  They’re quite inquisitive and attracted to humans, but beware – they’re legs are strong enough to cause serious bodily injury.  You can find them in the outback, or at zoos, parks, and preserves.  They are also raised for their meat, and you can find in on local restaurant menus.

Animals are only one part of an amazing visit to Australia, but if you’re after the cute factor, you’ll want to be sure to include some opportunities for sightings in your tailor made holidays.

What makes you go “ahhhhh” for Australia?

NOTE:  This post was sponsored by Bridge & Wickers; the opinions expressed are those of the author.