Changing of the Guard at Presidential Mansion in Athens 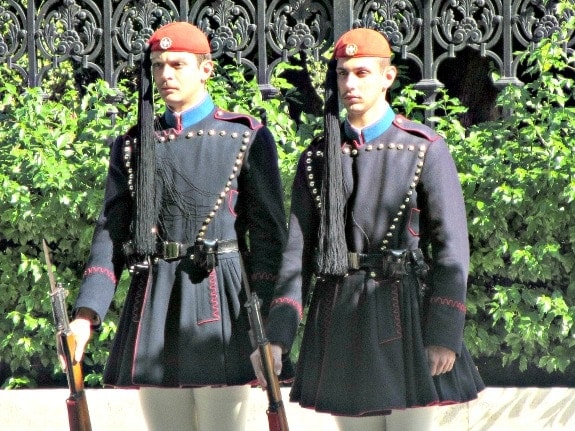 The Presidential Mansion is located across the street from Athens’ National Gardens, and I happened upon it at the changing of the guard.

Called the Evzoni, the guard is an elite ceremonial unit drawn from the Greek Army, and members are usually identified early in the military career while in basic training. The Evzoni are responsible for guarding the Tomb of the Unknown Soldier, the Presidential Mansion, and the gates of the guard’s camp.

The Evzoni are easily recognized by and are a bit famous for, their traditional uniform which dates back to the Ottoman occupation of [amazon_textlink asin=’1631213075′ text=’Greece’ template=’ProductLink’ store=’travelingwithmj-20′ marketplace=’US’ link_id=’b1671088-382f-11e8-8f33-63e11b78ba21′]. the everyday uniform is a Farion (a scarlet fex with a black tassel), Doulamas (a navy blue tunic), and Periskelides (white woolen stockings, two pairs are worn) with Anapastos (a type of garter to hold the stockings in place). The shoes they wore we fascinating. Called Tsarouchia, they are basically red leather clogs with giant black pompoms on the top. The soles are studded with nails, facilitating the noisy sound made with each step.  They weigh nearly eight pounds, which makes some of the marching maneuvers pretty darned impressive.  There is fancier and more elaborate dress uniform worn for parades and ceremonial events. 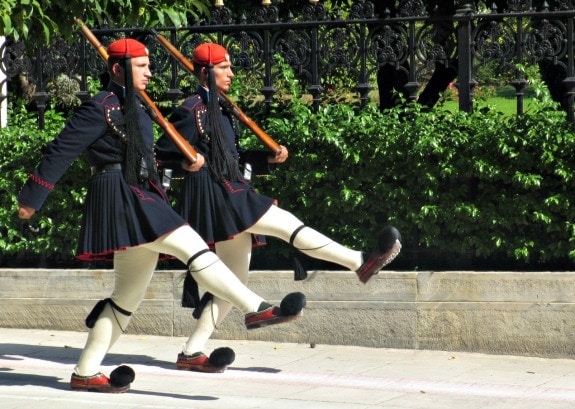 The guards serve in one-hour shifts, and tradition and discipline dictate that they are completely motionless unless performing official duties. The two Evzoni guarding the Palace change locations every 15 minutes, with a complete change in personnel every hour. Official movements, including the changing of the guard protocol, is highly stylized with slow and dramatically choreographed movements. Another officer, in a standard uniform, stands nearby to ensure that no one harasses the guards. 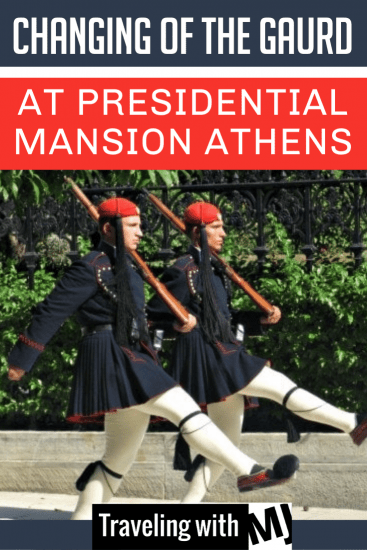 The Evzoni take their duties and traditions seriously. In 2001, a Molotov cocktail was thrown at the guardhouse and the guard on duty didn’t move until ordered to do so by the officer in the standard uniform, despite the guardhouse being engulfed in flame. On another occasion, the Evzoni refused to move from their post guarding the Tomb of the Unknown Soldier even though a bomb went off some 65 feet from where they were standing. Motionless.

Enjoy your time in Athens with one of these tours.

Powered by GetYourGuide. Become a partner.