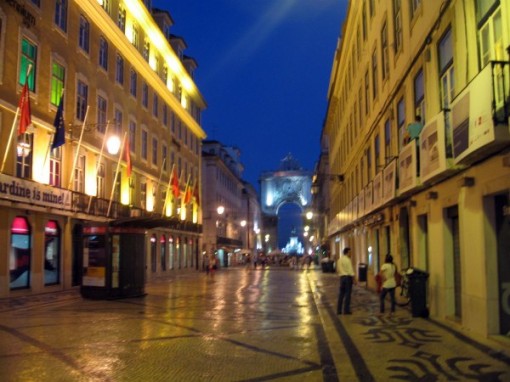 I’m back home from my shortened travels to Europe, with a few shopping souvenirs, lots of photos, fun experiences to talk about and write about for the coming year, and enthusiasm to get started planning next year’s trip.

It might seem like visiting the same place every year could get boring, but in Italy that’s never the case.  Our base of operations at La Montalla in Contignano (Tuscany) is a perfect spot to combine days of relaxation and days of exploration, both of which I need during extended travel.

Here’s what was new this year:

Portugal – Although original plans called for us to be here a week prior to heading to Italy, our rescheduled plans cut that way back.  We stayed at a lovely flat in Estoril, just a few minute walk from the beach, and enjoyed time walking the boardwalk between Estoril and Cascais.  Lisbon was just a quick train ride away, and we managed a quick city tour and some extended time in the Belem area.  That was about all we could do in a day and a half, especially consider that half day was after an all night flight, but it was enough to convince us that Portugal is somewhere we’ll be visiting again.  So much left unseen.  This was a first trip to Portugal which means I get to add another country to my list for the Century Club. 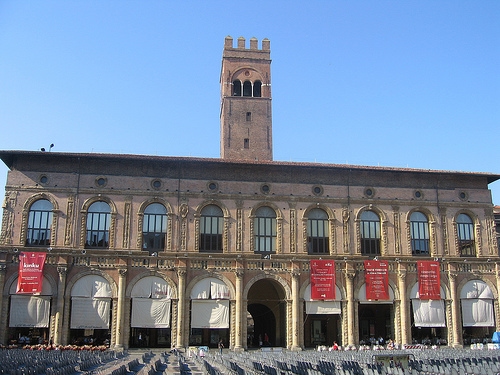 Bologna – This was a half way point on the trip from Portugal to Tuscany, and it was a fun couple of days in a university city.  Bologna is well situated for day trips around the area and offers some historical sites itself.  Il Nespolo, the apartment where we stayed, was in a neighborhood just outside the city giving us the advantage of enjoying local spots as well as being a short walk from the historic center (or a quick bus ride, if preferred).

Venice – We took the train from Bologna into the city, a little over an hour on the express, and it was a great day trip at much less the cost of lodging in the city.  I’ve heard all the complaints about Venice – it’s crowded (yes, and the swarms of visitors dragging their luggage through the streets made me tired just to watch) and smelly (that was not my experience at all), but I thought it was a magical place.  We wandered the alleyways, marveled at San Marcos Square, and took a boat ride on the Grand Canal.  Because it was a day trip, we weren’t able to experience the city at sunset (for a gondola ride under the Bridge of Sighs) or night, but have that on the list for another visit. 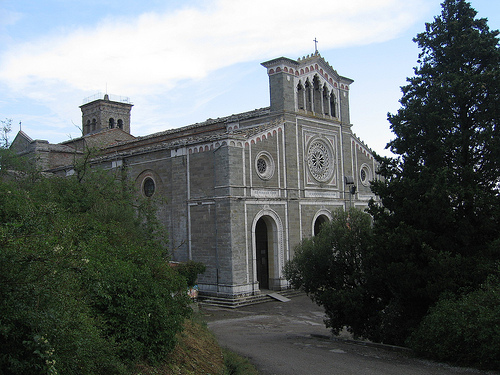 Cortona – This way the location setting for the movie and book Under the Tuscan Sun, along with the sequels Bella Tuscany, and Everyday in Tuscany, the area is as rife with sunflowers as was seen in the movie.  We walked through the town, climbing ever upwards, stopping for lunch when we got caught in a downpour.  The music from the Basilica of Santa Margherita drew us in for a look, and we continued climbing on up to the Fort for some gorgeous views of those sunflowers surround the area.  Walking through the narrow streets the smell of leather drew us into a few stores for some gift purchases. 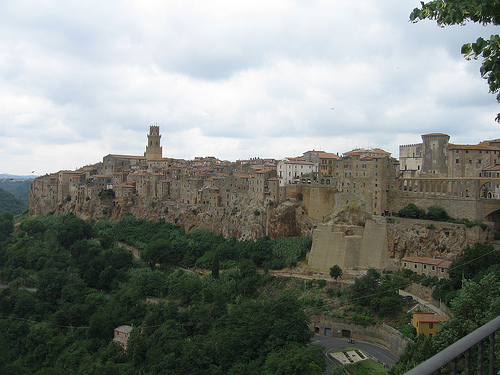 Pitigliano – The medieval hill town rises out of seemingly nowhere and is perched on a volcanic ridge.  We spent an afternoon in Pitigliano wandering the streets, having gelato, and looking around.  The main attraction in the town is the Palazzo Orsini, the 16th century residence of the prominent Orsini family.  Other interesting sights include the remains of a 14th century aqueduct (in the middle of the town) and and 18th century cathedral. 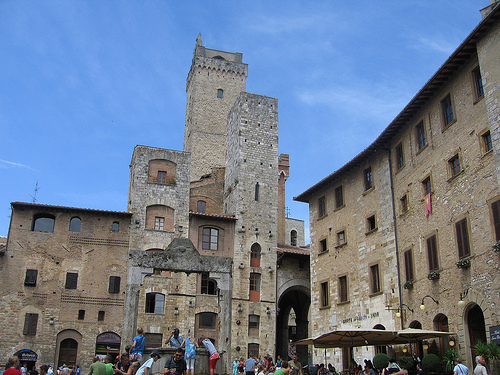 San Gimigniano – This walled city is probably best known for its many towers, originally built as the residents of the town warred with one another and felt the need to protect themselves.  In addition to the towers, there are also some impressive churches.  Like many of the hill towns, life resonates around the piazza, and that’s where we spent much of our time.  Of course, there was gelato nearby so that made it even more tempting.  I’ve heard some complaints about how crowded the town has become, but that wasn’t my experience.  San Gimigniano was featured in the movie Tea with Mussolini and the book The Broker. 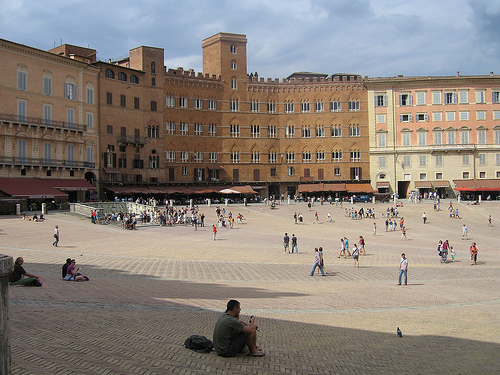 Siena – This is a large city, spread out over quite an area, but the real focus is on the historical center. Even that is fairly large compared to all the other hill towns in the area.  The Piazza del Campo is huge, and worth a stroll around.  The bars and cafes around the Piazza lean toward the expensive side, but if you consider it part entertainment expense, it’s worth it for the people watching.  This is also where the Palio is held, a summer horse race (on two dates) that is full of history and pageantry.  Next year we are planning to attend the Palio.  Also worth a look is the Duomo, originally designed to be the largest cathedral in the world, and its museum. 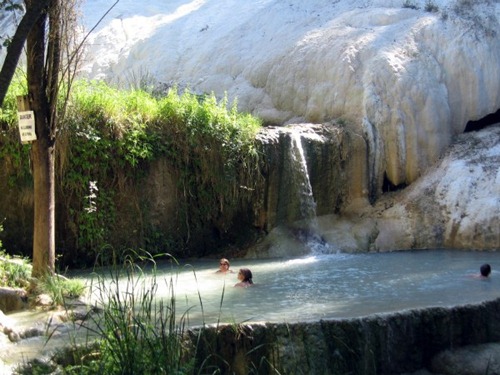 Bagni San Filippo – Wanting a low key type of day before packing and heading home, on our day-before-departure we spent an afternoon at the spa. This isn’t a spa in the sense that most of us might think, rather, it’s a natural spring tucked away in the Val d’Orcia near Mount Amiata.  You walk down a path to get to various pools that are filled with warm thermal waters full of minerals.  There’s a slight sulphur aroma, but it’s not overpowering and you quickly get used to it.  The springs are set to nourish and rejuvenate the body and soul, and I’d have to agree.  We tried out a few different pools, continuing to walk farther down the pathway, and stood under warm waterfalls along the way.  My favorite pool was the one with mud full of minerals.  Reach into the water, pull some up, and rub it all over your body.  After it dries, go stand under the waterfall to rinse off. We’ll be back to this little slice of heaven!

Combined with return visits to some of our favorites spots, we managed to see and do a lot in our 2 1/2 weeks.  And to those who wonder why we go back to the same spot every year – it’s because there is so much to do and see, and we still haven’t seen it all.