Experience Space Travel at the Astronaut Hall of Fame

At the US Astronaut Hall of Fame in Titusville, Florida, you’ll have an opportunity to experience both the technical side of space travel, as well as the very personal side of it, with exhibits tracing our race into space, not only historically, but also from the personal perspective of participating astronauts. 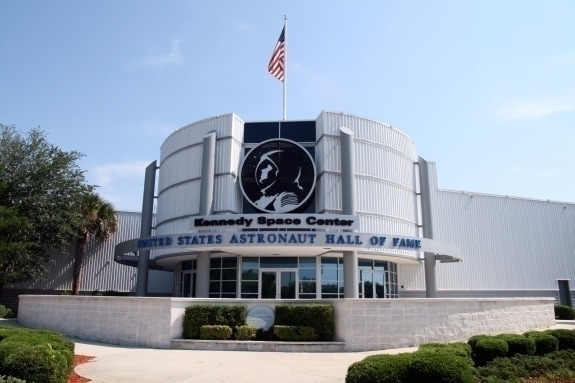 The Science on a Sphere exhibit offers a wonderful 3-D view of what the earth and the solar system look like when seen from space.  You’ll see a season of hurricanes, watch the spectrum of commercial air traffic move across the world, and take a look at how space technology and meteorology intersect.

You’ll see spacecraft from the Mercury and Apollo days, and be fascinated by the personal memorabilia on display. These artifacts tell the personal stories of the astronauts, their thoughts and dreams and goals, and speak volumes about the individuals who soar so high above the earth.

Inductees into the Astronaut Hall of Fame are selected by a panel after a review of individual contributions to space exploration. The inaugural inductees were the first American astronauts, the Mercury Seven, and included Alan Shepard (the first American in space), John Glenn (the first American to orbit the earth), and Gus Grissom (commander of Apollo I, his second space mission, tragically killed on the launch pad).

The Hall of Fame now includes all of the astronauts from the Gemini, Apollo, and Skylab program.  The 2010 honorees, inducted earlier this month, are:  Guion Bluford, Jr., Kenneth Bowersox, Frank Culbertson and Kathryn Thornton.  They join the names of all inductees into the Hall of Fame and are listed in a beautiful glass etching along the Hall of Heroes.

The US Astronaut Hall of Fame is a wonderful stop for anyone with a penchant for the space race, an provide a great look at where we’ve been and a chance to dream about where we can go.

Space fans who can’t get to Florida, may be interested in checking out the space exhibits at a number of other locations, including the Udvar Hazy Center in Washington DC (map).

Location:  6225 Vectorspace Boulevard, Titusville, Florida (map).  The Hall of Fame is part of the larger Kennedy Space Center Visitor Complex (map), and is about an hour drive from Orlando.