Rolling Along in Antwerp Belgium

I rolled into Antwerp by train, like many visitors to the city, arriving at the city’s ornate Central Station. I’d heard that the station was impressive, it makes the most beautiful list often enough, and the stone, iron, and glass architecture didn’t disappoint. I’ll let the architectural community argue over the appropriate style of the station, and I’ll just appreciate the dome and the turrets, the marble and the glass, and the gold.

The Central Station was completed in 1905, and although it has been refurbished and expanded a couple different time, the station’s opulence has not been diminished. Today the station has four levels and 14 tracks that connect Antwerp with the rest of the country and the rest of Europe. Does it look somehow familiar? Perhaps you’ve seen the Sound of Music flash mob video 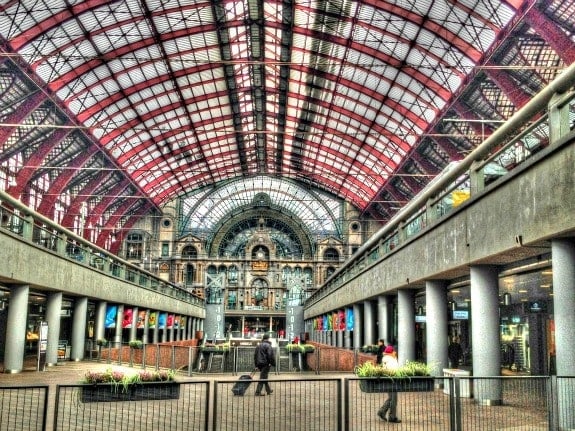 If you find yourself with time to kill, there’s plenty to keep you occupied besides marveling at the architecture – you’ll find over 30 diamond and gold shops at the station. If that doesn’t provide you enough to choose from, just wander into the diamond district, adjacent to the station. Although the Antwerp diamond trade has had its share of bad press lately, nearly 85% of the world’s rough diamond business still passes through here. Most diamond businesses are closed on Saturday and Jewish holidays; window shopping will definitely be easier on your budget.

With tastes more budget inclined, you can pop next door to the Antwerp Zoo. Established in nearly 170 years ago, the Antwerp Zoo is one of the oldest in the world. Admission will set you back about $30, depending on the exchange rate, but it’s a cheaper afternoon than shopping for gold or diamonds. 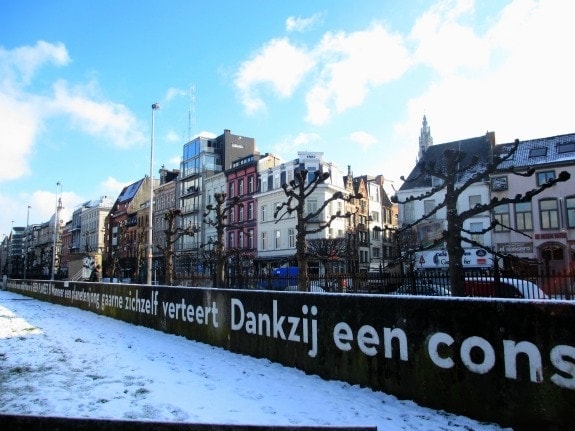 There was snow on the ground, although it was heading into the middle of March, and although the blue skies did little to stave off the bitter cold, it did make everything just a little bit prettier.

As the story goes, and you can choose to believe it or not, Antwerp got its name from a giant who charged a toll to anyone who wanted to cross the Scheldt River. You dared not refuse to pay the toll as the penalty was to have one of your hands cut off and thrown into the river. There would have been a lot of one-handed people were in not for our hero – who cut off the giant’s hand and threw it into the river. The name evolved from the Dutch word for hand, “werpen” and the Old English word for “throw.”

If you don’t like that story’s version, there are plenty of others, but the bags of chocolate hands available in the local Antwerp chocolate shops help me decide which story I want to believe. 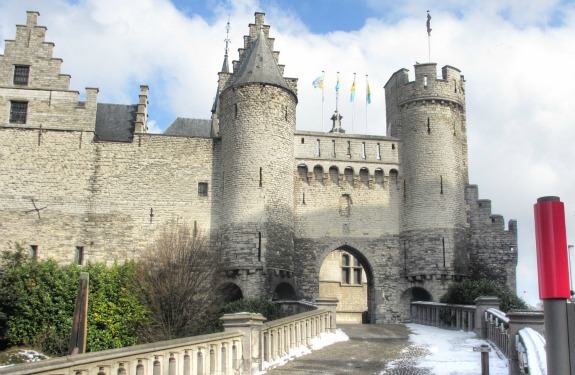 If you don’t like the giant and the hand story, there’s another giant story that may capture your heart and imagination.

It may look like just another romantic castle, but Het Steen is a medieval stone fortress built along the Scheldt River by the Vikings during the Middle Ages. The fortress is the oldest building in Antwerp and has served time as a prison, a church, museum, and a war memorial.

Now, as for the giant reference. At the entrance bridge to the Het Steen is a statue of a giant and two humans. The giant represents one who used to terrorize the city dwellers during medieval times. Antwerp has serious giant envy. 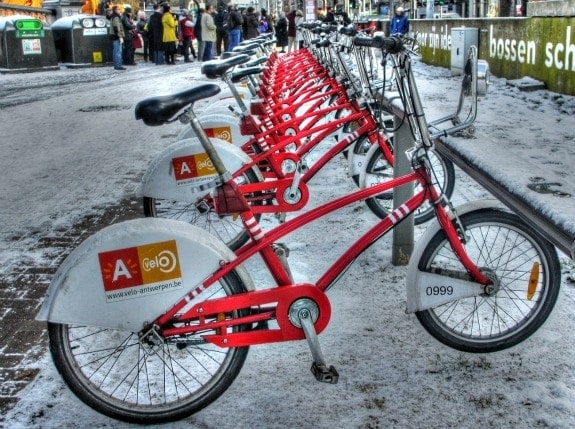 Take a roll around the Antwerp by bicycle, located at rental racks around the city. Reasonably priced, reasonably located, and the most convenient way to get around this medieval city. 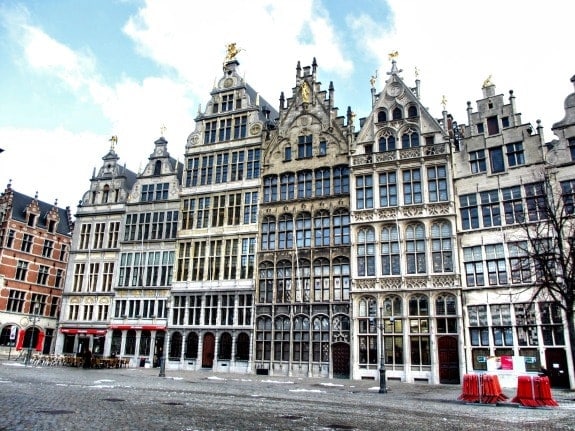 Pedaling into the city’s town square, you’ll find rows of guild houses lining Grote Markt. Guilds were associations of tradesmen, sort of a cross between a modern day union and a fraternity, and guild houses and guild halls were their meeting places.

The city’s original guild houses were destroyed by fire, the presents ones having been built in an elaborate Flemish renaissance style. Take a close look at the roofs of the guild house – you’ll see a variety of statuary depiction on the top. 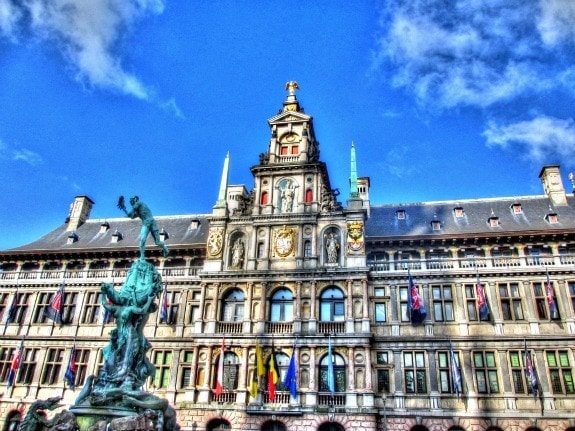 The Antwerp City Hall is located along Grote Market, and is an impressive example of Flemish and Italian inspired Renaissance architecture. When it was built in the mid-1500s, the ground floor of the building was occupied by small shops whose rent payments helped to pay for the construction of the building.

In the center of the town square is a fountain with a statue of Brabo – the hero who fought off that toll-demanding giant – depicting our hero throwing the giant’s hand into the river. While it’s easy to chalk up the statue to the legend, there’s also a not-so-subtle political message to the statue – a reference to Dutch politics of impeding free access to the Scheldt River. 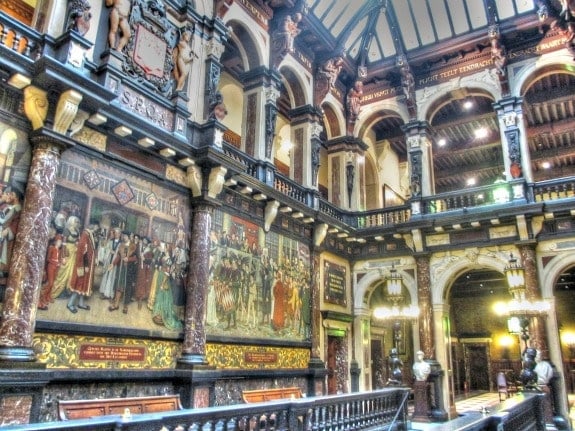 The interior of Antwerp’s City Hall is filled with art, most of which dates to the 19th century. Official and ceremonial offices are located in the building. 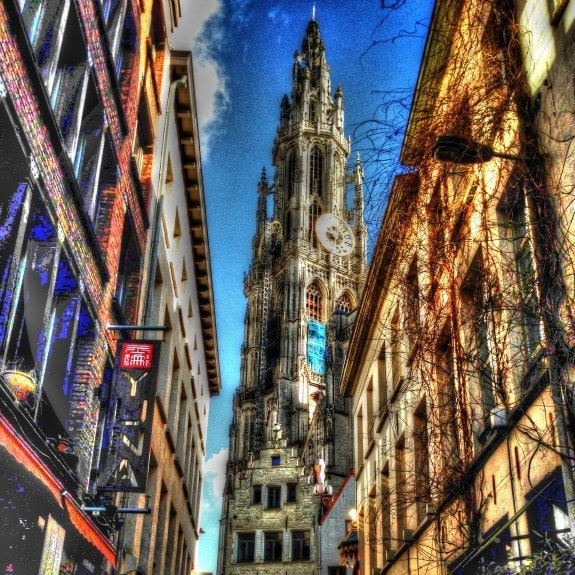 The Gothic-styled Cathedral of Our Lady, a Roman Catholic cathedral, was completed in 1518. It is on the list of UNESCO World Heritage Sites. 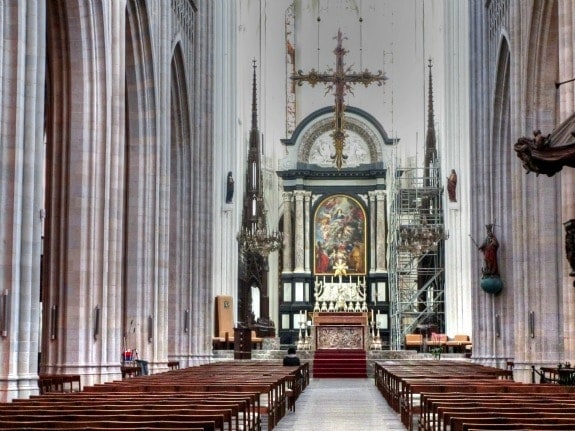 The ornately decorated interior of the Cathedral has four works by Baroque painter Rubens. The Cathedral is open to visitors for a fee (approximately $6.50) and is also open for traditional worship services. It’s worth the time to explore the various artistic styles, take in the Rubens, and take a moment to take in the religious significance of the location. 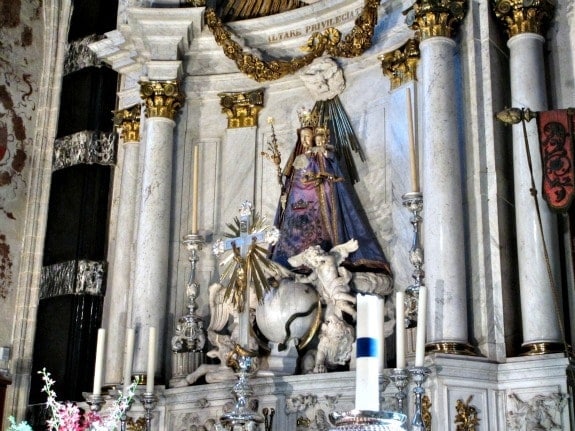 The main sanctuary, as well as the smaller worship areas surrounding the main worship area, are full of art, some impressive and significant, other more local and traditionally focused. 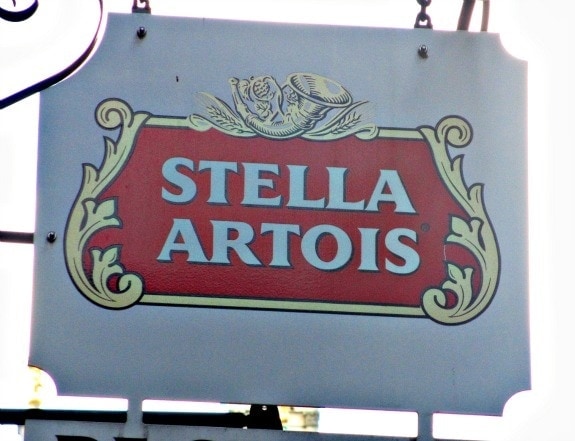 After a busy day of touring Antwerp, stop off at one of the many chocolate shops in the city for a tasty treat – or enjoy a refreshing beverage at one of the local bars. While many of the local beers were unfamiliar to me, I did recognize this Stella Artois sign. The Belgian Stella can be found in the U.S. 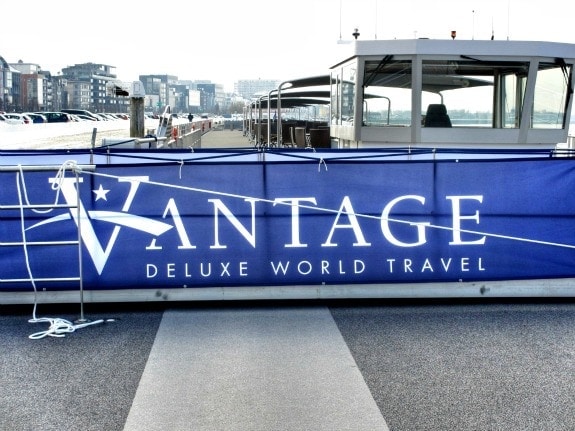 I may have rolled into Antwerp, but I sailed out in style – onboard the River Splendor, one of two new ships launched by Vantage Deluxe World Travel. The inaugural sailing of the River Splendor included the christening of the ship, a stop in Bruges, and ending up in Amsterdam. Be sure to check back for upcoming features on the ship itself, as well as my time in Bruges and Amsterdam.

Pin this to your favorite Pinterest board so you can plan your trip to Antwerp, Belgium. 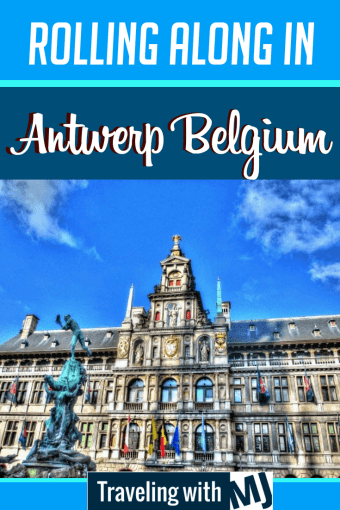 NOTE:  My time spent in Antwerp was as a guest of Vantage Deluxe World Travel for the inaugural sailing of the River Splendor. Most, but not all, of my expenses were covered by Vantage. You may refer to my disclosure policy for further details about my policies regarding accepting sponsored travel.