Sex and the City’s Magnolia Bakery

With Sex and the City 2 set to premiere May 27th, there’s plenty of talk about those four glamorous women from New York City:  Carrie, Samantha, Miranda, and Charlotte.

Entering our lives with a television debut on June 6th, 1998, these four glamorous women drew us into their lives of angst and glamour.  They tried to make us feel as if their loves were our loves, that their hangouts were our hangouts, and their heartbreaks were our heartbreaks. 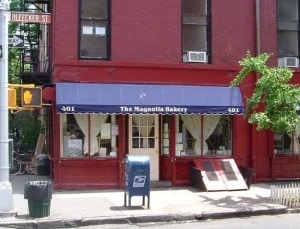 Many of the locations seen in the television show, and the first movie, are real-life Manhattan locations.  Although there are several tour companies offering SATC location tours, most of the locations are places that you can discover on your own.  And while a restaurant reservation might be hard to come by, one place that anyone can get into is Magnolia Bakery in the West Village.

The bakery was a fairly quiet, although popular, neighborhood spot until Sarah Jessica Parker’s Carrie was seen eating a butter cream frosted cupcake.  Shortly after, popularity reached near cult status, and it was not uncommon to see tour buses circling the block or long lines outside the door and around the block, even late at night.  Magnolia Bakery is credited with kicking off the cupcake craze.

In addition to cupcakes, the bakery offers a variety of confectionary pleasures, including cakes, pies, cookies, and delicious banana pudding.

While once you may have had to visit New York City to sample tasty cupcakes, you can now find cupcake specialty bakeries across the country.  Or try making some yourself.  You’ll find great recipes in The Magnolia Bakery Cookbook: Old-Fashioned Recipes From New York’s Sweetest Bakery.

Prices:  Cupcakes are $2.75 each, and are limited to one dozen per customer, if you want more than a dozen, you’ll need to order in advance.

And to get in the mood for the SATC2 premiere, take a look at this trailer: