I’ve had a Kindle since the very first generation was released. It’s served me well (although I do have my eye on upgrading to the Kindle Paperwhite), allowing me to carry all the books I’d like to read for a little under half a pound. Compare that with the weight and bulk of carrying around a book or two – or a dozen when I’d head to Europe for a few weeks – and it makes practical packing sense. Don’t get me wrong, I still love the heft of a real book and the feel of real paper, but my back and shoulders appreciate my efforts to lighten the load when I’m on the road.

I’ve recently discovered that my local public library offers Kindle books on loan, and it’s an inexpensive way to catch up on a lot of titles I’ve missed. I have lots of travel going on, meaning hours and hours on a plane, so I put out the call to some of my traveling friends and they came back with all sorts of great suggestions.

Here are a few that I’ve read that are perfect for the plane, beach, or the hammock. 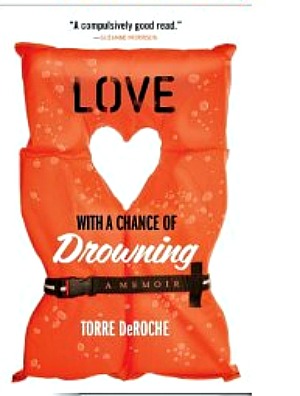 Love With a Chance of Drowning – Torre DeRoche

City girl Torre DeRoche isn’t looking for love, but a chance encounter in a San Francisco bar sparks an instant connection with a soulful Argentinean man who unexpectedly sweeps her off her feet. The problem? He’s just about to cast the dock lines and voyage around the world on his small sailboat, and Torre is terrified of deep water. However, lovesick Torre determines that to keep the man of her dreams, she must embark on the voyage of her nightmares, so she waves good-bye to dry land and braces for a life-changing journey that’s as exhilarating as it is terrifying.

I enjoyed this book for a couple of reasons. First, I sort of felt like I knew Torre through some Facebook groups, and I had followed her story of self-published e-book, to publishing contract, and even to a movie deal. I like supporting people I know.

The book also felt real. It was a love story, but more than that, it was a story about learning to love yourself through facing your fears, admitting your failures, and learning when it’s time to change course. We all have life-changing journeys to take, whether across the ocean or across our town, and there are more than a few lessons we can take away from Torre’s journey. And her description of the islands in the South Pacific have me jonesing to visit. This one is worth the money to purchase.

Traveling with Pomegranates: A Mother and Daughter Journey to the Sacred Places of Greece, Turkey, and France – Sue Monk Kidd and Ann Kidd Taylor

Sue Monk Kidd has touched the hearts of millions of readers with her beloved novels and acclaimed nonfiction. Now, in this wise and engrossing dual memoir, she and her daughter, Ann, chronicle their travels together through Greece and France at a time when each was on a quest to redefine herself and rediscover each other.

I selected this book based on recommendations, and since I had enjoyed The Secret Life of Bees and The Mermaid Chair, I thought it was a pretty safe bet. I liked it, but didn’t love it as much as some of my friends.

The format of the book was alternating chapters written by mother, then daughter, and when the story focused on the travel, I enjoyed it. While the styles were different, the prose was crisp and evocative; it stimulated my senses, and made me long to visit those same destinations. I read the book after returning home from Greece, and the chapters that talked about experiences and discover in that country were particularly interesting to me. I know that when I return in the fall, I’ll have a different appreciation for it, by learning about some of the history and stories of the gods and goddesses.

But when the chapters focused on the existential angst of growing older, being rejected to graduate school, whether to get married, write a book, or how to relate to one’s mother/child, I started to tune out. It all felt a bit self indulgent and contrived, and at times I wanted to scream, “get over yourself” or “first world problems”, but then it would veer off in a different direction and I’d keep reading.

The book got rave reviews (it’s a NY Times best seller), so you probably should give it a try. YMMV (your mileage may vary) – you may love it more than I did.

100 Places You Will Never Visit: The World’s Most Secret Locations – Daniel Smith

The world is full of secret places that we either don’t know about, or couldn’t visit even if we wanted to. Now you can glimpse the Tora Bora caves in Afghanistan, visit the Tucson Titan Missile Site, tour the Vatican Archives, or see the Chapel of the Ark. This fascinating guide book takes a look at 100 places around the world that are either so hard to reach, so closely guarded, or so secret that they are virtually impossible to visit any other way.

Lists. Writers love to hate on lists, claiming it’s not meaningful writing and the world would be a better place without them. Sometimes it feels like a literary snob thing. But, search any book catalog, and you’ll find a teeming array of books of lists. Despite all the naysaying, somewhere writers are writing lists. I have little literary snobbery, so give me a fun list to dissect and argue about and I’m good.

This is a book of an unusual list. Not pretty scenic destinations to tempt you to visit. No, not this time. This is a list of some of the most obscure locations, many of them quite terrible, and you can’t go visit them. Honestly, some of them I’m not sure why you would even want to. This list of 100 places includes a variety of location categories:  religious, governmental, spy, military, commercial, and some that defy categorization. I’d heard of some (the Oval Office, Fort Knox, and the US-Mexico Drug Smuggling Tunnels), others I had not (Snake Island, Great Pacific Garbage Patch, and ADX Florence Jail.

I didn’t read this book, it was more like skimmed it. I’d flip through the sites that didn’t interest me, spending more times on the ones that fascinated me. You can quickly move through the 100 sites, each of which takes up a couple of pages, and there are photos and annotations to round out the knowledge base. (NOTE:  These are hard to see on the Kindle itself, but display much better in the Kindle app on the iPhone and iPad.) It was a fun book, a good library check out rather than a purchase.

Everybody’s Got Something – Robin Roberts

Following her mother’s advice to “make your mess your message,” Robin taught a nation of viewers that while it is true that we’ve all got something — a medical crisis to face, aging parents to care for, heartbreak in all its many forms — we’ve also all got something to give: hope, encouragement, a life-saving transplant or a spirit-saving embrace.

If you’re a viewer of Good Morning America, you already know this story. Broadcast journalist Robin Roberts successfully fought breast cancer, only to be felled by an unusual form of cancer caused by the breast cancer treatment. Much of her diagnosis, treatment, recovery, and coming to terms with her illness played out on network television, so you won’t find a lot of surprises here. There’s also a fair bit of name dropping, after all, this is a woman who has been invited to the White House, hosted a red carpet Oscar show, and received numerous awards. But don’t let that put you off this quick read.

Rich or poor, black or white, facing a diagnosis of cancer forces you to come to terms with things. Your friends are more precious than ever. Your loved ones more dear than ever.  And for some, the determination to survive is more fierce than ever. This book is about the recognition of what’s precious in life and how it is all threatened in the blink of an eye.

Despite the heavy topic, it’s an easy read. You can probably finish it on a long flight.