When you hear the destination Miami Beach, what do you think of?  If you’re like me, you probably think about sun and sand, the beaches and swimming pools, lazy days and wild parties at night, and a pretty laid back, carefree attitude.  You aren’t far wrong if that’s what comes to mind.

Situated among all the frivolity, however, is the Holocaust Memorial, a dramatic tribute to the six million Jewish Victims of World War II.  The site was designed by architect and sculptor Kenneth Treister, who was charged with interpreting the events of the Holocaust into a memorial that would honor the dead, comfort the survivors, and inform the world of this dark period of history. 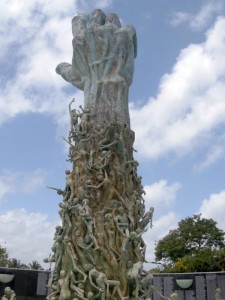 Sculpture of Love and Anguish at Miami Holocaust Museum

The Memorial opened to the public in February 1990, with a dedication by Nobel laureate, and Holocaust survivor, Elie Wiesel.

It is hard to explain how something that is so very painful, can also be so very beautiful, but that is an apt description.  Constructed with contrasting elements of Jerusalem stone and black granite, and then set in the still waters of a reflecting pool, the site is one of those places that may just be everything to everyone.

On one of the granite wall panels is the history of the Holocaust, from 1933-1945, along with pictorial depictions of events and experiences from that time.  Other panels have become a Memorial Wall, with the names of victims inscribed in it, much like the Vietnam Memorial.  How very sad to see the names of entire families that were lost.

By far the most dramatic presentation of the Memorial is a 42-foot high bronze arm and hand, looking like it is coming out of the earth and grasping toward the sky.  Titled The Sculpture of Love and Anguish, it is composed of close to 100 figures, in different family groupings, struggling to climb up the arm.  It symbolizes the pain and despair of a man-made hell.  The hand at the top of the arm bears an identification number.

Although the immense tragedy and pain of the Holocaust can never be summed up in such a simple statement, I’d like to think that out of all evil shall come good, and that the Memorial provides visitors with a way out of their pain.

Admission: There is no admission charge; donations gratefully accepted.