The Roman Coliseum: Birthplace of Civilization

Of all the wonderful things that I saw in Rome, and there were lots of impressive sights, the Coliseum was the highlight.  It was my first glimpse of the city as I came up from the train station.  I stood for a minute clearing my head and getting my bearings, and then I looked up.  There was the Coliseum directly in front of me.  I stood there, across the street from history, and it simply took my breath away.

The Coliseum in Rome is the largest remaining monument of Imperial Rome, and is the top landmark in a city that’s full of landmarks.

Built between AD 72-80, the Coliseum was originally called the Flavian Amphitheater and was the center of the city of Rome.  It was the first and the largest (it covers about six acres) permanent amphitheater built in the Roman Empire. 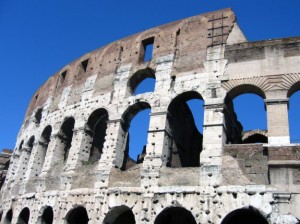 The exterior of the building consisted of four floors – three tiers of arches and an attic. On top of the attic was a series of brackets and sockets that allowed a shade to be pulled over the arena for sun protection, and a canopy that could be pulled over to protect guests from the rain.  It was a fairly complex system that may have served as the forerunner to the retractable roof that many stadium and arenas have today.

Anyone who has seen Russell Crowe in the movie Gladiator, has a pretty good idea of how the Coliseum operated.

80 doorways led into the interior arena area, with tiers of marble benches for spectators.  Seating was arranged by rank, with the emperor and noblemen at the front, and working men and women at the rear.  It was an efficient seating plan that allowed for the smooth arrival and departure of nearly 50,000 spectators.

Originally, the arena floor was wooden with sand over it.  There were various trapdoors that opened up to let lions and other ferocious beast enter the arena.  (You can still see the outline of many of those trapdoors today.)  There was also a fairly advanced underground aqueduct system that allowed the floor to be flooded for water battles.  This arena is where the gladiator battles and other public spectacles took place – the ultimate battle between the lions and Christians.  Many of both died in the games.

In the middle ages, the Coliseum was used as a fortress and a quarry, but in 1749 Pope Benedict XIV declared it a sacred site because early Christians had been martyred there.  Stations of the Cross were installed and it became a holy structure, although one that was allowed to fall into disrepair.

During the 19th century conservation of the Coliseum began, and its ties to the Catholic Church were renewed.  In recent years, the Coliseum has become a symbol of the international campaign against the death penalty, and the night illumination changes from white to gold whenever a death sentences is commuted, the prisoner released, or if a jurisdiction abolishes the death penalty.  For example, in December 2007 it was lit in gold when New Jersey abolished the death penalty. 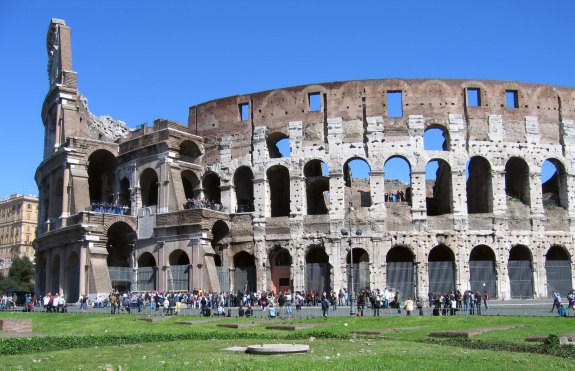 Although the interior of the Coliseum is in ruins, you can still see several of the marble benches from the early days.  It is used for an occasional event (a few hundred spectators can be accommodated in temporary seating), and larger events like concerts have been held outside the arena on the grounds.  Paul McCartney and Elton John both had concerts on the amphitheater grounds.  Each year on Good Friday, the Pope leads a torch lit procession for the Stations of the Cross.

The exterior grounds of the Coliseum can be wandered at no charge.  Look out for the young men dressed up like gladiators who’ll stand with you for a photo.  There’s a fee involved.   You can walked around the entire perimeter, enjoy the grounds,  marvel at the architecture, and soak up the feel of history.

Admission is charged to get inside, although EU citizens, students, and seniors have a reduced rate.  Timed tickets are available in advance or you can buy them at the Palatine.  The lines are generally shorter at the Palatine than at the Coliseum itself, and the ticket covers admission to both sites.  An audio tour is available for an additional charge.

Photo credits:  all from personal collection