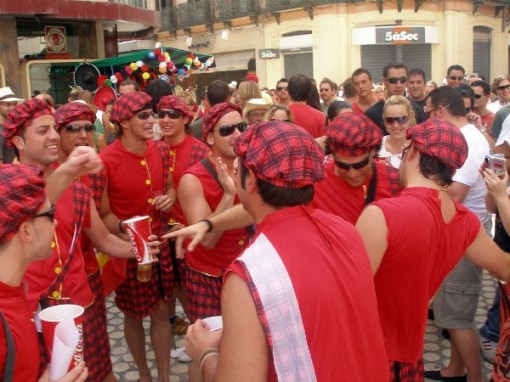 The Feria de Málaga, also known as the Feria de Agosto, is a long-standing tradition in the city of Malaga, located on Spain’s south coast. The name of the festival translates into Málaga Fair or August Fair, and is in honor of the incorporation of the city into the Crown of Castile by Isabella I of Castile and Ferdinand II of Aragon on August 18, 1487.

The first year the event was celebrated was 1491, starting with a simple procession and some bullfighting. It has since evolved into a 10 day party, still including the parade and the bullfighting, but now with fireworks, traditional music and dance, and of course, food and drinks.

The Feria is distinctly divided into a day festival and night festival. La Feria de día runs in the city’s historic center from midday to about 7 p.m., and during that time you’ll find traditional flamenco dresses, Andalusian horses pulling carriages (replacing cars), music, food, drinks, and vendors selling various novelties at booths along the street. At night, the festival moves to the fairgrounds located at the edge of the city. The party continues from around 9 p.m. until dawn with rides, live music and dancing, as well as food and drink. Bullfights are held every evening in the city’s bullring at La Malagueta.

Millions of people visit the fair each year, though many are locals. Perhaps the tourists visiting the Costa del Sol area are too distracted by the gorgeous beaches?  The Costa del Sol (sunny coast) offers a nearly 100 mile stretch of beach, and while it was historically populated with fishing villages, it has since grown to become a well-known travel destination.  Summer is the most popular time to visit the Costa del Sol, but it’s possible to enjoy the sun and sand practically year round thanks to the mild Mediterranean climate. Golf is also a very popular activity in the area. You will find over 50 golf courses to choose from, many of which are located on the cliffs overlooking the sea.

Besides being known for the bustling August Fair and amazing beaches, Málaga is also Pablo Picasso’s birthplace. Check out the Picasso Museum, located in the heart of the city. There are permanent exhibits which include famous paintings such as Mother and Child (1921-1922) and Portrait of Paulo with white hat (1923).  A few minutes’ walk away in the Plaza de Merced is Casa Natal, Picasso’s birthplace, where you will find exhibits about the painter and his life.

Malaga is served by Malaga Costa del Sol Airport, an international airport that connects the city with the rest of Europe, Africa, the Middle East and North America (service from New York, Toronto, and Montreal).  Malaga airport transfers are easy to arrange should you prefer to leave the driving to someone else.

The mild climate and rich history of the city of Málaga makes it worth a visit any time of year, though one might argue the festival alone makes August the best month for a trip!

Author Bio:  This guest post is by Abbie Mood.  Abbie lives in Denver, Colorado and is a freelance writer, editor and teaches preschool Special Ed.